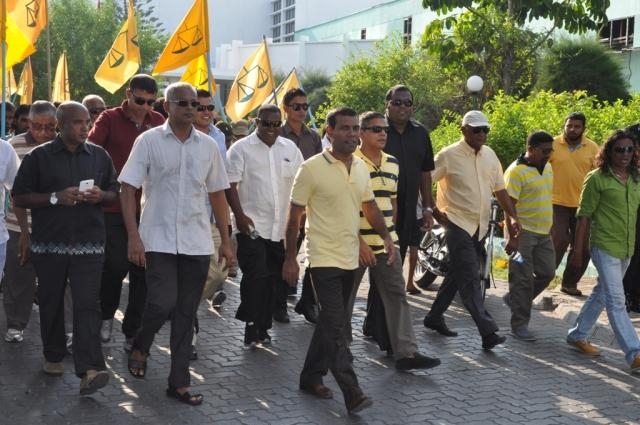 Maldivian Democratic Party (MDP) has held a march led by former President Mohamed Nasheed along the main streets of Male’, against the Supreme Court.

The protesters stopped by Bandaara Miskiy near Supreme Court to voice their opinions, but there was no violence. The police had blocked the area leading up to the Supreme Court.

The march was attended by a large number of MDP supporters who called to abolish the Supreme Court bench. They also criticised the justice system and called for the resignation of President Dr Mohamed Waheed Hassan Manik.

Speeches were given at the protest by MDP Parliamentary Group Members, Thoddoo MP Ali Waheed and Dhidhdhoo MP Ahmed Sameer.

They called on the authorities to refrain from trying to undermine the parliament, and said that the justice system and the Supreme Court bench require reform.

The protest by MDP was held in relation to two recent rulings by the Supreme Court, whereby it declared that the parliament violated the Constitution when it passed to establish secret voting for no-confidence votes taken at the parliament against the president and ministers, and when it decided to dismiss Mohamed Fahmy Hassan from his post as Member of Civil Service Commission.