If I am chosen, I will increase the party membership to 65,000 before the presidential election: Yameen 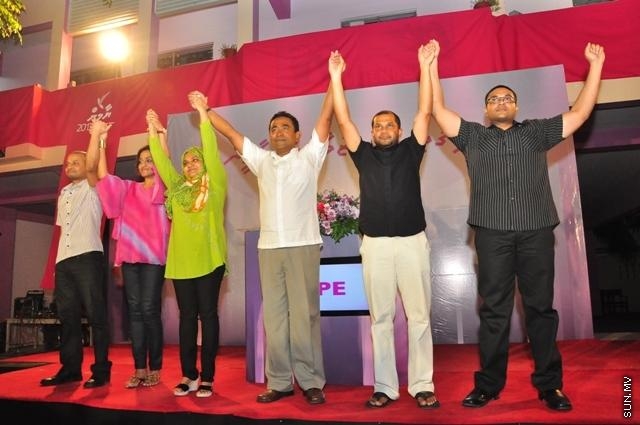 Progressive Party of Maldives (PPM) presidential primary candidate Abdulla Yameen has said that he will increase the PPM membership count up 60,000 or 65,000 before they face election, if the members elect him to compete in the upcoming presidential election.

Speaking at a campaign meeting held in Ghiyasuddin School last night, Yameen said that by request of the former President Maumoon, he had worked to increase the PPM membership even when the party was first established and that and said that he will increase the party’s membership to 65,000 before the presidential election.

“If you give us assurance from the vote on the 30th, by the time we reach the presidential election, with more effort and without show of any fatigue, by August I will increase our party's count from 31,000 to 60,000 or 65,000, God willing,” Yameen said.

Yameen said that fingerprints are recorded when registering members to PPM, which makes the party the most legitimate of the political parties. Speaking of his pledges for his future term, Yameen said that he will make the society a peaceful one and properly implement the laws. He vowed that he will fulfill the needs of the youth, straighten the health sector and work towards combating corruption.

The PPM presidential primary is scheduled for Saturday, 30th of this month. Maumoon’s children made an appearance at last night’s campaign meeting as a show of support for Yameen. The meeting saw Dhunya Maumoon, Farish Maumoon, Gassan Maumoon and Yumna’s husband Mohamed Nadheem go up on the stage and hold hands with Yameen in a show of solidarity.

Farish had made appearances in Yameen’s rival candidate Umar Naseer’s campaign rallies earlier as well. He has however, not publicly vouched for any candidate.

Speaking at last night's meeting, PPM’s former Deputy Leader Abdul Raheem Abdulla said that all of Maummon’s children support Yameen and that that would be reason to vote him.