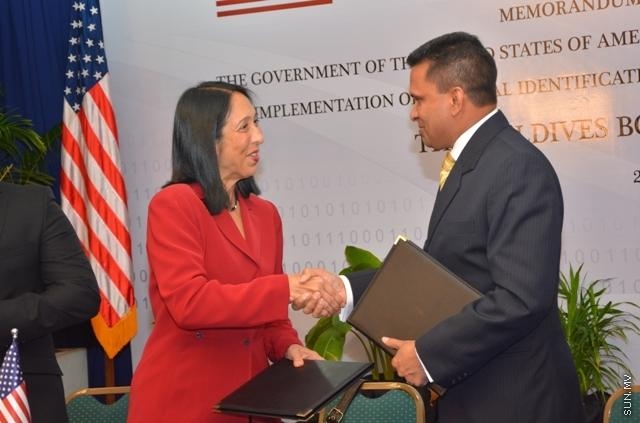 A Memorandum of Intention (MoI) has been signed between the governments of the Maldives and the U.S., regarding the establishment of a Border Control System provided gratis by the U.S. government.

The agreement was signed at a ceremony held at Maldives National Security Service (MNDF) Coast Guard Building today by Defence Minister Mohamed Nazim on behalf of the Maldivian government, and U.S. Ambassador to Sri Lanka and the Maldives Michele J. Sison on behalf of the U.S. government.

After signing the agreement, Defence Minister Nazim said that efforts are ongoing to commence the services of the new Border Control System in June 2013.

“A U.S. technical team will arrive in the Maldives in the first week of April. They will conduct a survey to identify the entry and exit points. Our aim is to complete the work in three months, and commence the services of the new Border Control System in June,” Nazim said.

The U.S. Embassy has said that the Border Control System called Personal Identification Secure Comparison and Evaluation System (PISCES) is used at the major entry and exit points in the U.S. as well as in several advanced countries around the world.

Defence Minister Nazim said that the free system would enable the Maldivian government to save MVR 500 million.

U.S. Ambassador Sison said while speaking at the ceremony that the establishment of the Border Control System is a sign of strengthening relations between the two countries in various areas.

The PISCES was developed by the U.S. under the Terrorist Interdiction Programme (TIP) commenced in 1997. It is a system that uses biometrics to identify people and allows countries to strengthen border control security, and has been installed in 20 countries including Pakistan, Afghanistan, Iraq and Thailand.

The U.S. Department of State has assured that in addition to the establishment of the system, it would also provide training for staff and assistance in expanding the system in the future.

Man sought on suspicion of theft found injured on the street