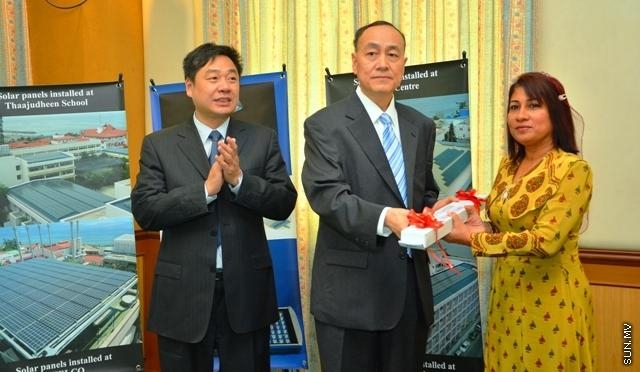 The Government of China has donated 250,000 LED tube lights to the Government of Maldives, as part of their “Provisions of goods to addressing climate change” initiative.

The lights were presented to the Maldivian Government by the Deputy Director of the Chinese National Development Reform, and was received by the Maldives Minister of Environment and Energy Dr. Mariyam Shakeela. The ceremony was held in SHE Building in Male' today.

Speaking to the media after the ceremony, Dr. Mariyam Shakeela said that the tube lights will be distributed to the islands and that the lights will reduce the power consumption for lighting. She said that a large percentage of money spent can be saved as result of the donation.

“This is a gratis donation to us from the Chinese Government. We will distribute the lights to all islands in the country. How we will go about this will be announced at a later date,” said the Minister.

LED tube lights were first introduced to the Maldives by an English company SKK Lighting, during the “Maldives Hotel and Trade Exhibition 2008.”