There is no room for politics within the military: Defence Minister Nazim 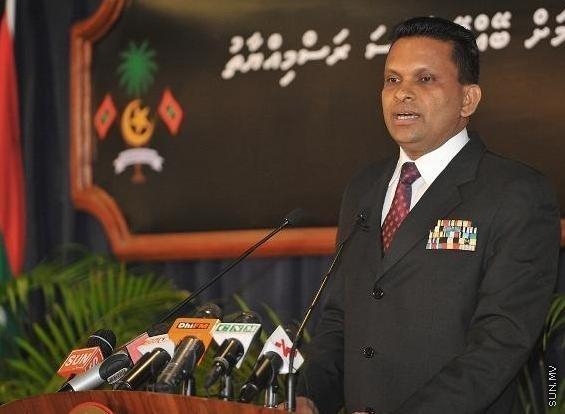 Minister of Defence and National Security Colonel (Rtd) Mohamed Nazim has said that he will not allow room for politics within the military.

Speaking at a flag hoisting ceremony held in celebration of the 121st anniversary of the Maldives military service today, Defence Minister Nazim assured his soldiers that he will not issue a politically motivated order, and that he will not allow room for politics to fester within the military, as long as he holds office as the Minister of Defence.

“I would like to take this opportunity to assure you that I will not issue a political order. I would also like to tell you that there will be no room for politics in the military as long as I remain in this office.”

He said that a soldier must yield some of the rights of a civilian, and that this includes refraining from politics, which holds a larger goal and purpose.

“Every soldier has to accept that some of the rights granted to a civilian in an open society are restricted to a soldier. One of these rights is the right to participate in political activities. I would like to tell you that the Constitution and the military law have curbed these rights from the soldier for a greater and larger purpose.”

Speaking on the same note, Defence Minister Nazim said that the role of the soldier is limited to casting the ballot and that the soldier must respect the administration, regardless of who holds power.

“I would like to tell you today, that the role of a soldier is done once you exercise your right to cast your vote, entitled to every person above the age of 18. I would like to bid from all military personnel to refrain from partaking in political activities,” Defence Minister Nazim said.

He continued to state that all parties shall ensure that the military remain shall remain in serving their duties and pledged that he will work towards improving the Maldives military service.