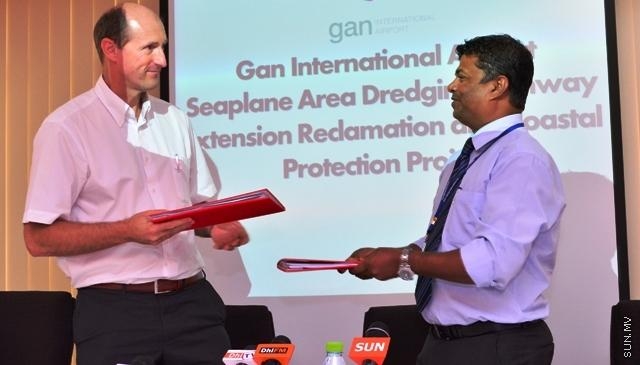 State Trading Organization Plc. (STO) has commissioned a Dubai company for a project worth $11.7 million (MVR 180 million) to reconstruct and develop certain areas of the Gan International Airport.

The developmental project will see the lengthening of the airport’s runway, the reclamation of land to build new sea plane terminals, and the placement of revetments on the banks of the reclaimed area.

The agreement was signed between STO and Gulf Cobla.

Speaking after the signing event,Shahid Ali told the press that the project will see the lengthening of the Gan International Airport’s runway, the reclamation of a land for new sea plane terminals, and the reinforcement of the shores, and that all aspects will all be completed within 8 months.

“Dredging will take about 8 months. We predict that the physical work can begin within one month of signing this contract,” Shahid said.

He said that the project will facilitate to provide sea plane services from Gan International Airport, and that negotiations are currently underway to commence more international flights from the airport.

Managing Director of Gulf Cobla Mr. Joost Post also assured that project will be completed within 8 months and noted that the company had carried out four different projects previously in the Maldives.