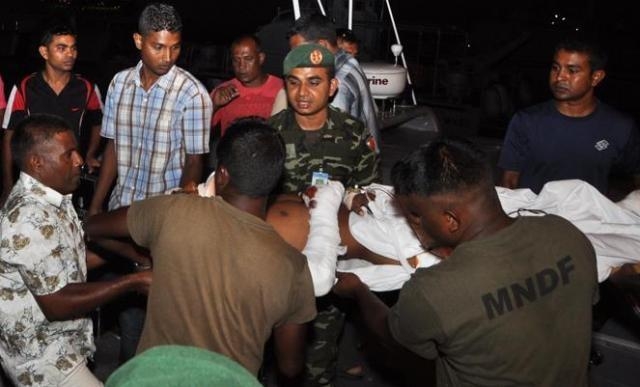 A young man in Dhaalu Meedhoo has been seriously injured while trying to disentangle a fishing line from the propeller of a dhoni (boat) in the sea.

Nauf Ibrahim, 18, hit his head in the propeller and suffered serious injuries while trying to remove the line.

Family members of Nauf said that he dove into the sea to remove a fishing line caught in the propeller of ‘Mashhooru’ dhoni while it was out fishing. In the process, Nauf’s head hit the propeller, resulting in a skull fracture and internal bleeding.

Maldives National Defence Force (MNDF) said that since the accident occurred near Laamu Atoll, Nauf was initially treated in Laamu Atoll Hospital and later transferred to IGM Hospital in Male’. He was transported to Male’ in MNDF’s Kurangi helicopter.

Nauf’s family said that he is not receiving sufficient treatment in IGMH and he will be taken to Sri Lanka tonight for further treatment, which will be paid for Meedhoo MP Ahmed Siyam Mohamed.