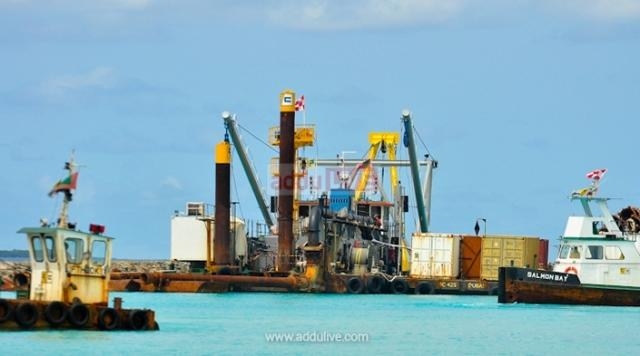 The reclamation work of Gan Airport will be officially inaugurated in Gan by President Dr Mohamed Waheed tomorrow evening. This project has been delayed due to difficulties in transporting the dredger to the reclamation area.

The area to be reclaimed to extend the runway of Gan airport is the causeway between Gan and Feydhoo.

Managing Director of Addu International Airport (AIA) Shahid Ali said that work is ongoing by Gulf Cobla, the company commissioned to carry out this project, to take the dredger to the Feydhoo/ Gan area.

“It has been decided to bring the dredger in between Gan and Villingili. The permit required to do this will be provided by the Environment Protection Agency tomorrow. Now we don’t have to blow up the reef to bring in the dredger,” he said.

Shahid said that the dredger will arrive at the location tomorrow.

The project to reclaim the seaplane area of the Gan Airport was commissioned by AIA to Dubai’s Gulf Cobla for $11.7 million.

The seaplane area will be reclaimed and a reef will be constructed under this $40 million project.

AIA said that Gulf Cobla should complete reclamation work to extend the runway and seaplane area, and the construction of the reef, within eight months.

AIA has also said that the Gan Airport development project will be completed next year.

Even though this project has been commissioned to Gulf Cobla, the main contract for this project is with UK’s Lagan Construction.