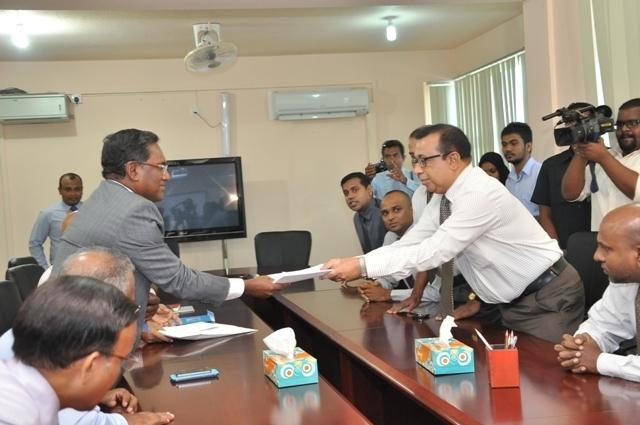 President Dr. Mohamed Waheed Hassan Manik has today filed his candidacy at the Elections Commission to stand for the presidential elections to be held in September this year.

President Waheed has announced that he will compete in the September 7th election as an independent candidate.

Following the handover the candidacy papers, EC President Fuad Thaufeeq spoke to the president’s campaign team and assured them that the Commission will make every possible effort to ensure that this year’s presidential elections is conducted in a free and fair manner.

President Waheed also assured on behalf of his team that they will provide their full cooperation to make sure that the elections is free and fair.

The Commission thanked Dr. Waheed for his support and cooperation.

Speaking to the press after the meeting, the President said that in his campaign trips, he will employ every privilege and protection granted to him by the laws and that his aids will continue to accompany him on such trips.

President Waheed said that he is confident that they will win the presidential election.

“God is good, and our confidence is high. Thasmeen and I, we came forward with big hopes,” President Waheed said.

Elections Commission will decide on a candidacy within 48 hours of submission. The candidacy for Maldivian Democratic Party’s (MDP) presidential candidate Mohamed Nasheed has already been approved by the Commission.