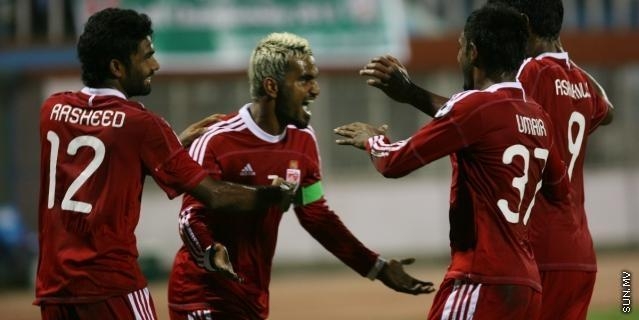 The Maldives has won 10-0 against Sri Lanka in the Group B match at the South Asian Football Federation (SAFF) Championship this evening.

The match kicked off at 5:45 pm at Dashrath Stadium in Kathmandu, Nepal, and Assad Abdullah scored the first goal already in the fifth minute.

The second goal was scored by captain Ali Ashfag (Dhagandey), who with a total of six goals made a double hat-trick.

The remaining goals were scored by Hassan Adhuham, Ali Umar and Ali Fasir.

Ali Ashfag is the only player who has made a double hat-trick in the history of SAFF Championships. He was also the best player of today’s match.

Regional sports papers have praised Ashfag and said that he is the reason behind the Maldives’ success in this match.

The Maldives has now moved to first place in Group B, and will meet Bhutan on Wednesday.