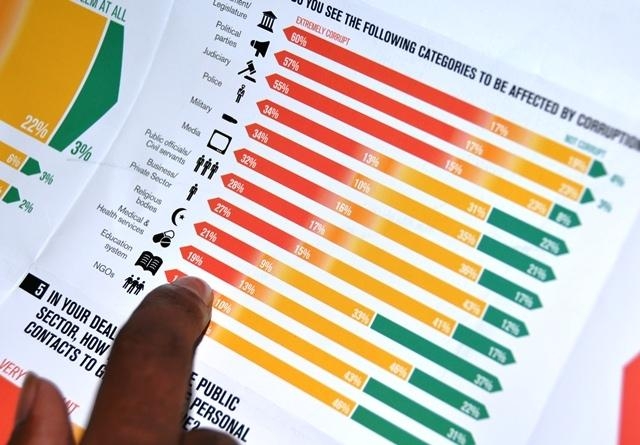 A Global Corruption Barometer (GCB) survey conducted by Transparency Maldives (TM) has shown that the parliament is perceived to be the most corrupt institution in the Maldives, followed closely by political parties and the judiciary.

Conducted through phone interviews with 1002 randomly selected individuals, the survey shows that 83 percent of the people feel that corruption has increased or stayed the same over the past two years.

Transparency Maldives said the figures are consistent with their 2012 GCB survey, but said in contrast to last year, the military and the religious bodies have found a spot in the most corrupt list.

Ranked the same as the police, the military is perceived the fourth most corrupt institution with 34 percent. Religious bodies are ranked number eighth with 21 percent of the sample stating it is highly corrupt.

Announcing the survey today, TM’s Advocacy Manager Aiman Rasheed said the institutions that are perceived to be most corrupt in the Maldives are also the most key institutions in a democratic system. In contrast, institutions such as utility companies rank higher in the GCB in other countries around the region, Aiman said.

The GCB survey was announced by the President of the Maldives Anti-Corruption Commission Hassan Luthufee, at a ceremony today.