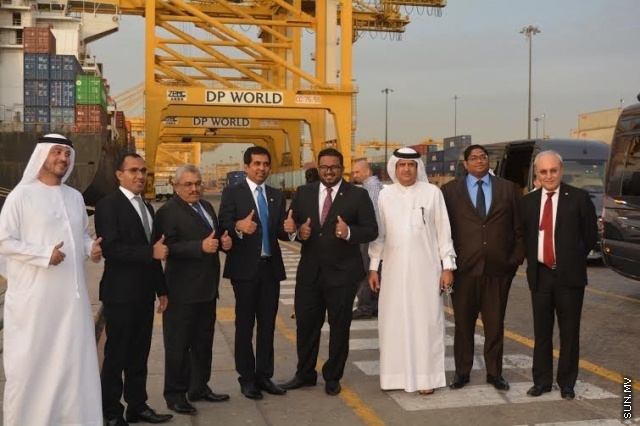 Minister of Tourism and co-chair of the Economic Council, Ahmed Adheeb said that the Thilafushi port developed by Dubai Ports World (DP World) would be completed in two years from the contract signing.

Talking to the media from Dubai, Adheeb said that a period of one month is estimated to finalize the items of the MOU signed with DP World. After that, a contract would be signed and the port will be completed in two years, says Minister Adheeb. He said that a timeline for the project have been established.

“The first phase would also include a big cargo container terminal. First the port service, then a free trade zone for the imported cargo which will be isolated with a fence. Import and export cargo will be kept there.” Adheeb said.

The minister said that with the development of the port in Thilafushi, economic and other sectors would move forward. He said that the Thilafushi port will be used as a transshipment port aside from export with other valued services like packaging.

Noting that the highest imports for the Maldives comes from ports in Dubain and Singapore, Adheeb said that the cargo from those parts aren’t always produced in that particular country but the quality of the port has advantages in importing cargo.

“Due to the efficiency of the ports in Singapore and Dubai with an established efficient free trade zone, cargo from all over the world is being brought to these ports. It’s collected and then go to their destination. So merchants can get items even if they (Singapore) didn’t produce the cargo and it’s cheaper to bring things in bulk and redistribute.” Adheeb said. For this reason, the establishment of a free trade zone would open opportunities for the Maldivian merchants, says Adheeb.

The Maldives have signed an MOU with DP World, which is famous for port management, to build a port and a free trade zone in Maldives. DP World operates 60 ports all over the globe. Maldives Economic Council estimates a 250 – 300 million US dollar investment in the Maldives for the project.

Thefts occurred during the fire