Resolution sent to Parliament to take action against Nasheed 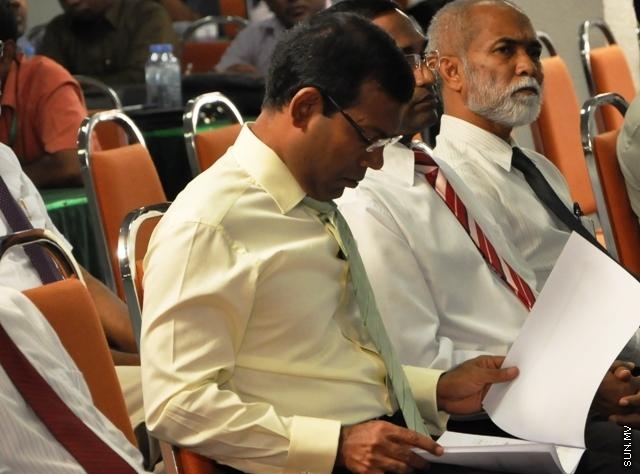 A resolution has been submitted to Parliament, requesting to take action against former President Mohamed Nasheed in relation to Nasheed’s resolution while he was President, which stated that government institutions should not implement lower court orders, and dismissed lower court Judges from employment.

The resolution was submitted by Deputy Leader of Gaumee Party and Vilufushi MP Riyaz Rasheed.

The resolution states that it was Nasheed’s attempt to intimidate Judges and destroy the country’s judicial system. If he had been successful, several people would have been deprived of their rights, justice would have been lost, and the state would have been in chaos for a long period of time.

Meanwhile, Kaashidhoo MP Abdullah Jabir had sent a similar resolution, calling for action to be taken against illegal practices carried out by Nasheed while he was President.

Riyaz stressed that Jabir’s resolution was different, in the sense that the new resolution deals with Nasheed’s attempt to destroy the judicial system, which should be probed by the Parliament.

“This is a completely different issue. This is to investigate and take action against Nasheed and his allies for their attempt to destroy the judicial system of the country. Whatever the outcome may be, this should be submitted to Parliament, even if it is only for the records. I want to see if MPs, especially opposition MPs, dare to probe this case. And this is not the end; I will submit several similar resolutions against Nasheed, because the Parliament should investigate all his illegal proceedings.”

Two resolutions prepared by Nasheed’s administration had leaked, one of which was to create a Judicial Reform Commission to reform and improve the judicial system. The other was to abolish lower courts.