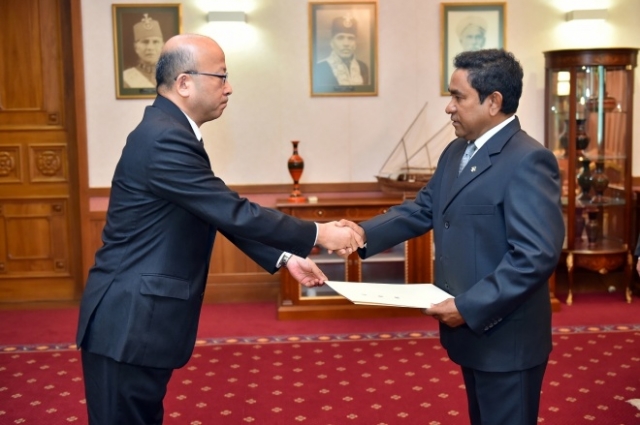 Ambassador Endo presented his credentials to Maldivian President Yameen Abdul Gayoom – who welcomed the move – in a ceremony held at President’s Office on Monday.

Japanese government opened its embassy for the first time in Maldives in June, making available services which people otherwise had to obtain from the Japanese embassy in Colombo, Sri Lanka.

Ambassador Endo will be replacing Kenichi Suganuma – who completed his term as Japanese Ambassador to Sri Lanka and Maldives.

During the call by Ambassador Endo, President Yameen congratulated his on the commencement of his term and welcomed the first resident Ambassador of Japan to Maldives.

Yameen expressed gratitude for the assistance provided by the Japanese government – especially in key areas such as social and economic development of the country.

He expressed hope that establishment of a Japanese embassy in Maldives will further strengthen the bilateral relations between the two countries – and facilitate more social engagements and high-level exchanges.

Meanwhile, Endo said that it was an honor to be the first resident Ambassador of Japan from Maldives, and said that he took confidence in how invested Maldivian government was to strengthen relations between the two countries.

The meeting was attended by Minister of Foreign Affairs - Dr. Mohamed Asim, Under Secretary at President’s Office - Mohamed Naseer, and Counsellor of Embassy of Japan - Masaharu Shimizu.