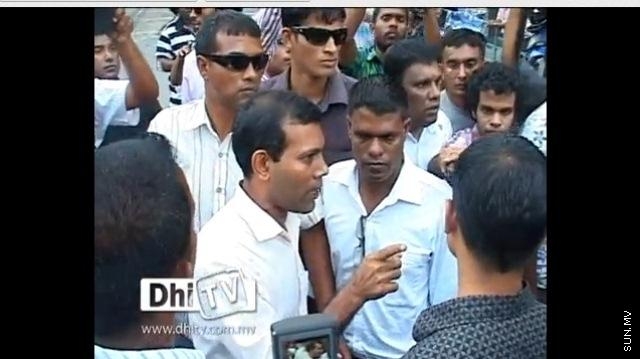 Nasheed was on his way to the Police Headquarters after being summoned for questioning, regarding the phone call in which he was heard inciting violence against the Police.

The video is now going around on social networks.

In the first part of the video, Nasheed is waiting with his supporters at the corner of Reefside shop. He is seen addressing a group of Police officers.

Then he points at someone and says angrily, “I have my eye on you.”

In the second part, Nasheed is standing surrounded by his supporters and a group of Police officers.

He asks a Police officer in plain clothes, “What is your name?”

The Police officer replies that his name is Ahmed Fadhih.

“Ok, where do you work?” asks Nasheed.

The Police officer replies that he works at ‘Maldives Police’.

Nasheed then asks for proof that he is a Police officer.

As the officer reaches for his pass, Nasheed asks, “What is your rank?”

The officer looks at his card and reads his service number.

Nasheed says angrily, “He’s the one who goes around injuring people!”

Someone is heard saying in the background, “Please don’t say that.”

“No, I saw it myself. I have seen with my own eyes. None of the other officers do that...I have observed very carefully, it’s only he who does that. Well, I know what to do now,” says Nasheed, pointing at the officer.

Nasheed, after attending Headquarters later that day, made a statement in which he said that he met with Police officers who work with ‘national and patriotic spirit’ inside the Police Headquarters.