Waheed has the opportunity of being elected President through PPM: Gayoom 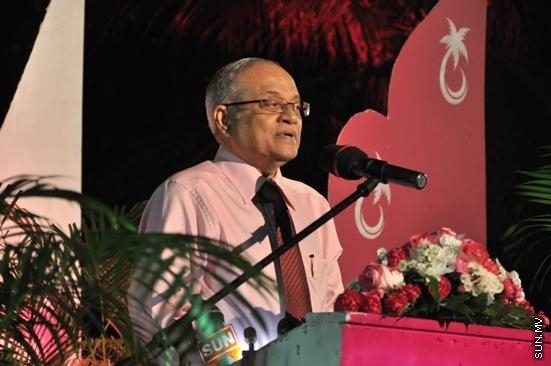 Former President and President of the Progressive Party of Maldives (PPM) Maumoon Abdul Gayoom has said that President Dr Mohamed Waheed Hassan Manik could become a member of PPM, and contest in the Presidential Elections following PPM’s presidential primary election.

Gayoom told reporters prior to his departure to India for medical treatment for his wife, that he had not yet made a decision on whether to contest in the PPM primary election.

President Dr Mohamed Waheed said while speaking on TVM last night that he will announce his decision soon on whether to contest in the upcoming Presidential Elections.

Gayoom said that despite this being an unofficial visit to India, he will meet India’s Prime Minister Manmohan Singh, and brief him on the current political situation in the Maldives, the events taking place in relation to the report of the Commission of National Inquiry (CNI), and street protests by Maldivian Democratic Party (MDP).

Gayoom said that PPM had agreed to participate in peace talks on the condition that MDP stops its street protests, but this has to be reconsidered as these activities have been resumed by MDP.

“If MDP stops its protests on the streets, PPM will sincerely participate in the discussions,” Gayoom said.

MDP and DRP have also agreed to participate in the discussions initiated by the President, regarding the action to be taken following the presentation of CNI’s report.