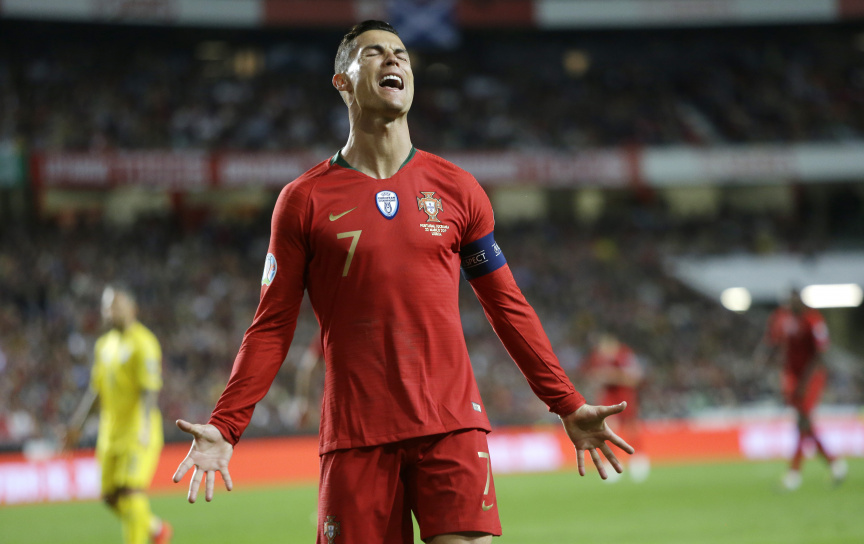 Portugal's Cristiano Ronaldo reacts after missing a scoring chance during the Euro 2020 group B qualifying soccer match between Portugal and Ukraine at the Luz stadium in Lisbon, Friday, March 22, 2019. (AP Photo/Armando Franca)

LISBON, Portugal (AP) — Cristiano Ronaldo's return wasn't enough to give title-holder Portugal more than a 0-0 home draw against Ukraine in qualifying for the 2020 European Championship on Friday.

In his first international since the 2018 World Cup, Ronaldo threatened in attack but failed to break through Ukraine's solid defense at the Stadium of Light, with goalkeeper Andriy Pyatov making a few big saves to keep the hosts at bay.

Portugal coach Fernando Santos said: "We had our chances and deserved to win."

In the other Group B match on Friday, Luxembourg defeated Lithuania 2-1.

Ronaldo hadn't played for Portugal since its elimination by Uruguay in the round of 16 at the World Cup in Russia.

Portugal has qualified for the semifinals of the inaugural Nations League, along with Switzerland, the Netherlands and England, and will host the finals in June.

Ronaldo's first opportunity was in the 22nd minute with a low shot from inside the area saved by Pyatov. The goalkeeper denied him again five minutes later, diving to his right to deflect his low shot following a run inside the area.

Pyatov also made a difficult stop from a curling shot by forward Andre Silva early in the second half, and also thwarted defender Pepe.

Ukraine, which next season will play in the top tier of the Nations League, did not get past the group stage of Euro 2016 in France.