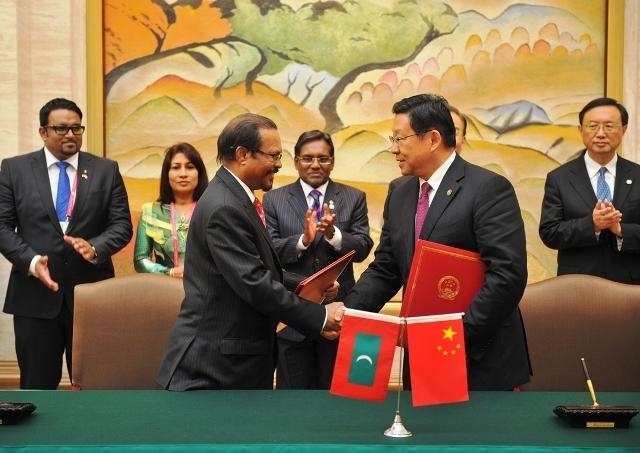 The governments of Maldives and China have signed three agreements on the $500 million loan given by China to Maldives, as part of President Dr Mohamed Waheed Hassan Manik’s current visit to China.

A statement issued by the President’s Office states that this includes the agreement on aid for next year, under the annual economic and expert aid provided by China to the Maldives. This agreement was signed by China’s Minister of Commerce Mr Chen, and Maldives’ Minister of Foreign Affairs Dr Abdul Samad Abdullah.

The second agreement is on concessional loans from China to Maldives, and this was signed by China’s Minister of Commerce Mr Chen and Maldives’ Minister of Tourism, Arts and Culture Ahmed Adheeb Abdul Gafoor.

The third was an agreement for a $150 million for the construction of 1,500 houses in Maldives via China’s Exim bank. This agreement was signed by China’s Minister of Commerce Mr Chen and Maldives’ Minister of Tourism, Arts and Culture Ahmed Adheeb Abdul Gafoor.

The signing ceremony was attended by China’s Prime Minister Wen Jiabao. This was the first time in 40 years that such agreements were signed in the presence of the leaders of Maldives and China.

Government Spokesperson Abbas Adil Riza said that these agreements, signed on the occasion of 40 years of bilateral relations between the two countries, will facilitate the $500 million loan from China mentioned earlier by President Dr Waheed.

After the signing ceremony, discussions took place about the ongoing trade and aid programs between the two countries. China’s Prime Minister extended full cooperation to Maldives in environment-protection programs, and assured the provision of aid for infrastructure and housing projects.

Neither the President’s Office nor the Chinese government have revealed details of the $500 million loan, such as its interest rate or the deadline for paying it back.