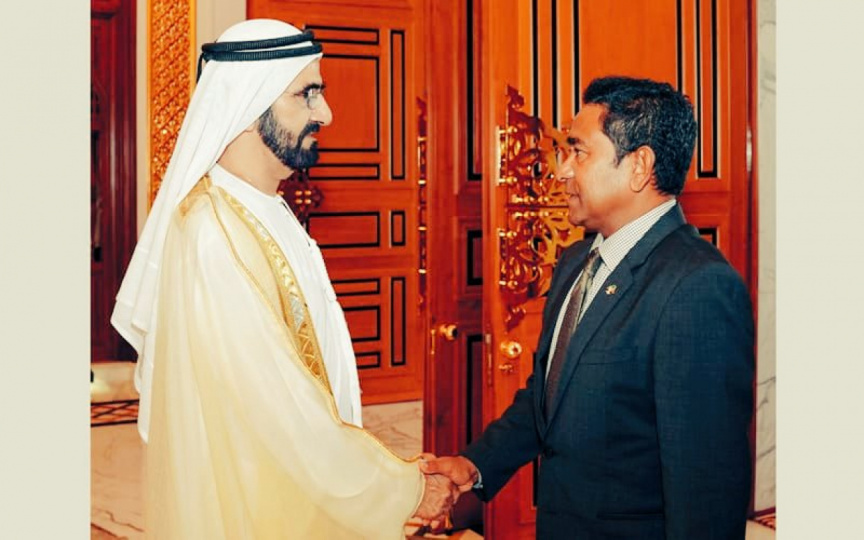 H. H. Sheikh Mohammed bin Rashid Al Maktoum shaking hands with former President Abdulla Yameen. PPM deputy leader Ahmed Shiyam appealed to the UAE government to intervene in the case of the former President who was jailed for five years by the Criminal Court after being found guilty of money laundering. (File Photo)

Former President Yameen’s PPM has appealed to the government of UAE to intervene and aid in the efforts to free him.

President Yameen was found guilty of money laundering and sentenced to five years in jail last Thursday by the Criminal Court. The opposition parties who have been protesting against the verdict described as a politically motivated farce have rejected the outcome of the trial.

Naifaru MP and deputy leader of PPM Ahmed Shiyam tweeted yesterday in Arabic, calling on the government of the United Arab Emirates to intervene and aid in the release of the former President. The tweet also stated that the former President had established a strong relationship between the two countries and appealed to intervene in the case described as “unjust”.

Shiyam’s tweet coincides with a visit by the Speaker of the Parliament Mohamed Nasheed and President Ibrahim Mohamed Solih, who are in Abdu Dhabi after accepting an invitation from H.R.H. Sheikh Mohammed bin Zaid, Crown Prince of UAE.

Flydubai to resume operations to Maldives in October