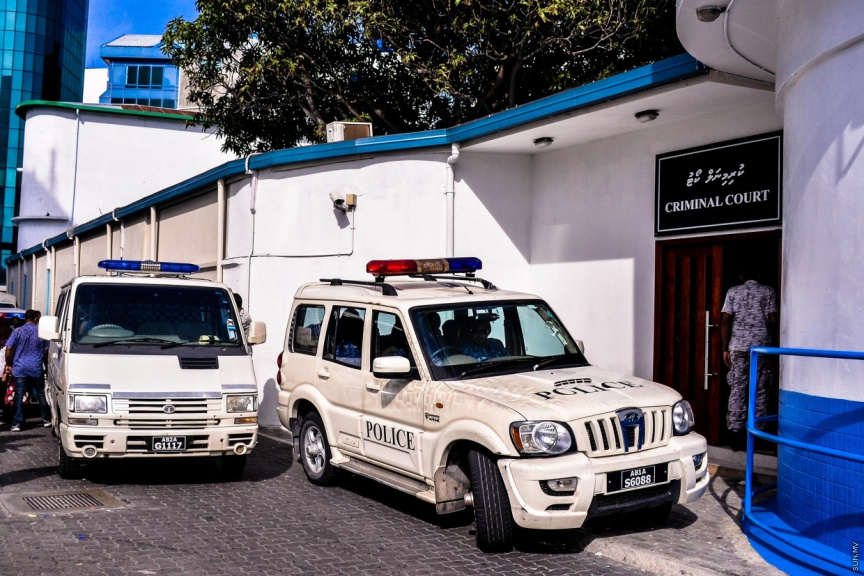 Criminal Court, on Sunday, decided to hold the trial of alleged terror recruiter Mohamed Ameen on hold until the Supreme Court makes a decision regarding allowing witnesses to give secret testimonies at courts.

Ameen (Kariyyavilla, Maadhadu, Gn. Fuvahmulah) has been pressed with two charges; being a member of a terrorist organization and conspiracy to carry out an act of terrorism.

The State has submitted a number of witnesses to prove the charges, among them secret witnesses.

At the pretrial hearing on Sunday morning, Ameen’s attorney, Ahmed Yameen asked for the disclosure of statements made by the State’s secret witnesses. He referred to a precedence set by the High Court on January 27, 2019, during the appeal of a conviction against former Chief Justice Abdulla Saeed, when it established there to be no legal grounds to take secret testimony.

According to the Criminal Procedure Code, the standard practice for taking witness testimony is to identify the witness, and summon him or her to court to deliver testimony in the presence of the defendant.

However, the Witness Act, which was enacted in 1976, does not state circumstances where a witness may be allowed to give secret testimony, nor a method where witnesses may give testimony without compromising their anonymity or safety.

The Act is currently under revision.

The High Court, in its ruling regarding Abdulla Saeed, noted that the Witness Act did not establish a way to ensure witness protection, and had yet to be revised, to date.

It noted that the Criminal Procedure Code stated that secret testimony must be taken in accordance with the Witness Act, and that the lack of establishment of such a way in the Witness Act cannot be taken as basis to conclude the procedure had been fulfilled.

It concluded that the decision to take secret testimony by assigning pseudonyms to the witnesses had therefore been wrong.

The ruling has been appealed by the Prosecutor General’s Office with the Supreme Court.

The presiding judge in Ameen’s case, Judge Ahmed Shakeel wished to proceed with the arraignment, so Ameen can be formally advised of the charges against him, and asked to enter his plea. He also noted that the High Court ruling in question had been appealed at the Supreme Court.

The State prosecutor requested that a decision regarding secret testimony be postponed to when the prosecution is required to present its witnesses.

Judge Shakeel decided in favor of the defense. He said that the arraignment would be held on March 15, the date scheduled for the next hearing, if the Supreme Court made its decision before that, but would be postponed if no decision was produced by then.

Yameen next pushed for Ameen to be granted conditional bail, citing arthritis and other health conditions. He said that a prior Criminal Court order restricted him from seeking medical attention.

The State prosecutor challenged the motion for bail, arguing that Ameen was a danger to the safety and security of the community.

Judge Shakeel decided in favor of the prosecution and denied the motion for bail.

Ameen was one of the suspects in the 2007 Sultan’s Park bombing which injured a dozen tourists. He evaded arrest by fleeing into neighboring Sri Lanka, leading to an Interpol red notice for his arrest.

In 2019, Ameen became the first Maldivian citizen to be named on terror watchlist released by the US Department of Treasury’s Office of Foreign Asset Control (OFAC). He was accused of being a senior leader of ISIS, who was actively engaged in leading ISIS recruitment in Maldives.

He was arrested on October 23, becoming the first person to be arrested and charged under the revised Counter-Terrorism Act.