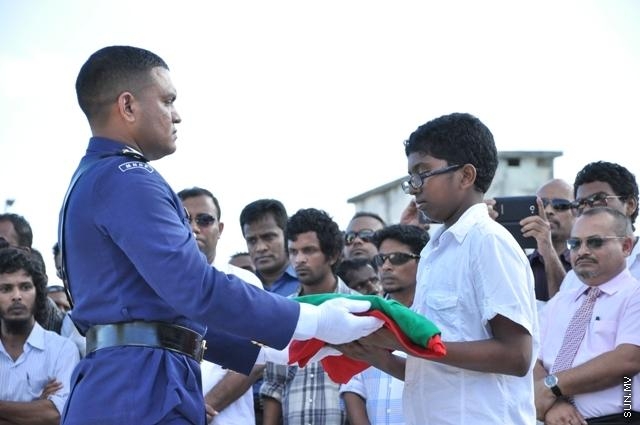 Member of Parliament for Ungoofaaru constituency and famous religious scholar, Dr Afrasheem Ali has been stabbed to death. The incident took place at around 1:15am tonight. This has been confirmed by the Police. Afrasheem's body is currently at ADK hospital.

02:30 - Ungoofaaru MP and renowned religious scholar, Dr Afrasheem Ali has been stabbed to death. The incident took place at around 1:15am tonight. This has been confirmed by the Police. Afrasheem's body is currently at ADK hospital.

02:39 - Sun reporter at ADK Hospital cited Afrasheem's wife and said that Afrasheem is likely to have been attacked on the staircase as he arrived at home after participating in a program on TVM. She said that his body was found on the staircase, covered in blood.

02:49 - Dr Afrasheem's wife Guraisha Mohamed just told Sun Online that part of Dr Afrasheem's skull was detached when he was found on the staircase, and that he had also been stabbed in the upper back.

03:16 - Several Members of Parliament are also currently at ADK Hospital.

03:19 - Police have restricted access to the area surrounding Dr Afrasheem's residence, H. Funvilu. A Police forensic team is currently active in the area.

"President Dr Mohamed Waheed Hassan Manik has requested that a national investigation be conducted into Dr Afrasheem's murder. This was an organised crime. Those responsible will be brought to justice. Police have commenced efforts in this regard."

Condemn the brutal killing of Dr. Afrashim. Will utilise all resources toapprehend the murderer(s). If any info plse contact @policemv .

03:57 - Dr Afrasheem's wife said that she went looking for him when he was late for dinner and did not answer the phone, and found him lying on the staircase. Beside him were the books he had taken with him to the TVM program.

"I strongly condemn this act. We are all in grief. We were shocked when we heard the news. Now is the time to exercise patience."

I am devastated to hear the sad news of Dr.Afrasheem's murder & strongly condemn this heinous crime, my thoughts& prayers r with his family

"Dr Afrasheem's death should not spark any unrest. Law enforcement officers have to investigate the incident until they find the people who are responsible. This should not be a beginning. This should be stopped."

04:47 - Sun Online has learned from a reliable source that one person has been arrested for the murder of Dr Afrasheem. This has not yet been confirmed by the Police.

"This is a serious offence, a serious crime. Their purpose is to create unrest in Maldives. Dr Afrashem Ali was a skilled person in many ways. He was highly educated in religious studies. We rarely find such scholars in Maldives. He has provided great services. He worked hard to educate people, via TV and other means. He was a great teacher. We lost a scholar today, and I am saddened by this. I strongly condemn this act. God willing, the perpetrators will be found and brought to justice through a Court process."

06.26 - A state funeral is to be held for Dr Afrasheem. Parliament Secretary General has informed that the funeral prayers will take place after Asr prayers at Islamic Centre. Today's Parliament sitting has been cancelled following this incident.

Dr Afrasheem's body will first be taken to Aasahara for washing and shrouding, then to Islamic Centre. People can pay last respects at Islamic Centre.

07:25 - The national flag will be flown at half mast for three days. President Dr Mohamed Waheed has issued a statement condemning this crime.

"I received news of the brutal killing of Ungoofaaru MP Dr Afrasheem Ali last night with deep sorrow and and sadness. This is a low-grade, heartless, dirty, brutal crime which I condemn in the strongest terms. All government resources will be utilised in bringing the perpetrators to justice. I express my condolences to the family of Dr Afrasheem. May god grant you patience. I assure the citizens of Maldives again, that the government will take all possible action to ensure safety and protection for citizens."

07.30 - Afrasheem's family is on their way to Male' for the funeral on three speedboats from his native island, Ungoofaaru. His mother's condition is not great.

08:54 - Photo caption: Afrasheem's body taken from ADK Hospital to Aasahara. Crowds have gathered near Aasahara as well. Police are maintaining security in the area.

09:15 - Adhaalath Party and MDP have issued statements condemning the murder of Afrasheem. MDP expressed condolences to Afrasheem's family, and strongly condemned the crime. They called on everyone to work together to bring those responsible to justice.

09:22 - Adhaalath Party also stressed that the perpetrators should be brought to justice, and called for the implementation of Islamic Sharia to prevent such crimes.

09:31 - Parliament Secretary General said that Afrasheem's body can only be taken to Islamic Centre at around 11:00. As per the family's request, washing and shrouding have been postponed until they arrive in Male'.

I call on all relevant authorities to do everything possible to bring those responsible to justice. Killing a person is the same as killing an entire humanity. We should be worried and saddened that such perpetrators exist among us. The dignity of human life is lost; children, religious scholars are becoming victims of such inhumane acts. This is a great threat to our country. I urge the nation to think deeply about this.

09:59 - Members of the family including Afrasheem's parents have arrived, and are currently at Aasahara.

We call on the relevant authorities to bring all those who are responsible for this uncivilised crime to justice and give them the harshest punishment possible, and urge the Maldivian people to stand up against such uncivilised, dangerous crimes.

11:23 - Afrasheem's body is being taken from Aasaharaa to Islamic Centre. The funeral prayer will be held after Asr prayer.

My deepest and heartfelt condolences are with the family of Dr. Afrasheem Ali. May Allah grant him eternal peace in paradise.

12:48 - Former President Gayyoom has paid his last respects to Dr Afraasheem, and expressed his condolences to the family. Several Members of Parliament are also present at the Islamic Centre.

13:00 - People are coming in large numbers to pay their last respects.

13:35 - Long queues, going up to Reefside on Chaandhanee magu and Republican Square, have been formed by those wishing to pay their last respects.

14:06 - People of Ga. Kanduhulhudhoo have protested against the murder of Dr Afrasheem. They called for the investigation of this inhumane attack on Dr Afrasheem, and said that those responsible should be taken to Court.

14:22 - In spite of the long queue waiting to pay their last respects, Dr Afrasheem's body has been taken to the main prayer hall of Islamic Centre for funeral prayers.

15:02 - Police have said that no person has been arrested, but some people are being questioned in relation to this crime.. It has been 12 hours since Dr Afrasheem was attacked.

15:32 - Crowds have gathered for the funeral prayer. Former President Gayyoom will lead the prayer.

15:35 - Thousands are participating in the funeral prayer. Burial will be at Aasahara.

15:38 - Funeral prayer has ended. The body is being taken onboard an ambulance to be transported to Aasahara. MNDF Officers are carrying the casket, with members of the public, including his father, also holding it.

15:54 - Crowds are walking with the ambulance carrying the casket to Aasahara. A state funeral will be held for Dr Afrasheem at Aasahara.

16:12 - Afrasheem's body been transported to Aasahara. Vice President and Speaker of Parliament are at Aasahara.

16:24 - Senior officials of the government at Aasahara for Afrasheem's funeral. The burial will take place shortly.

16:47 - Afrasheem has been buried in a state funeral at Aasahara. The funeral was attended by senior officials of the government and members of the public.