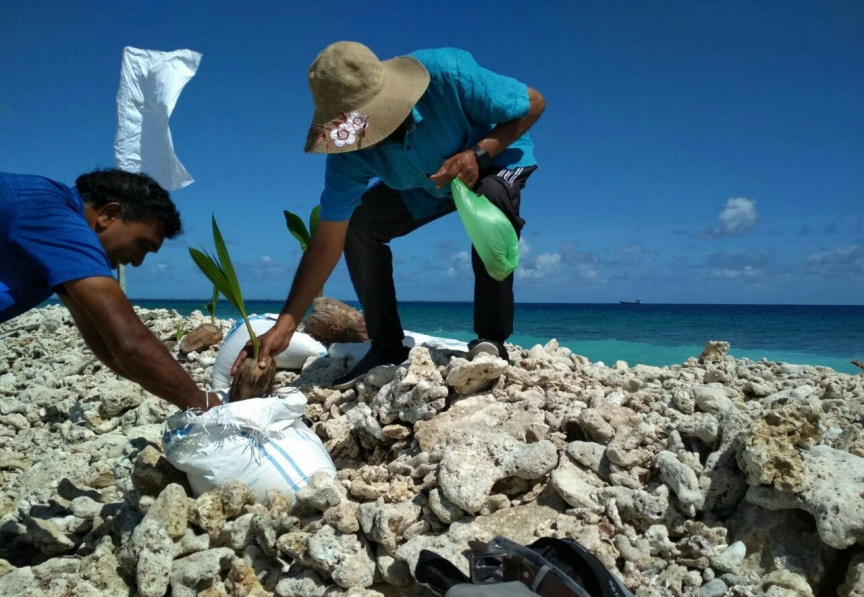 Representatives from Nalafehi plant trees in a newly formed islet in Addu which has been named 'Gauhere'. (Photo/Nalafehi Meedhoo)

The newly formed islet off Meedhoo, a district of the southern Addu City, has been named ‘Gauhere’ by local residents.

In a tweet on Saturday night, Addu Meedhoo MP Rozaina Adam said that Nalafehi, a non-governmental organization in Meedhoo, has planted palm trees and other vegetation on the islet.

“This island which measures 3,000 feet in length and 25-30 feet in width has been named by Meedhoo residents as ‘GAUHERE’,” she said.

The new islet was discovered last week, and its formation has been attributed to the recent spell of bad weather which resulted in swell wave surges across Maldives.

The islet is located in the lagoon of Meedhoo, towards Ismehele Here.

While similar islets have formed in the past, the new islet in Addu City is remarkably large.

State Minister for Environment Abdulla Naseer told Sun that islands form when masses of rocks and sand remain in place over a prolonged period of time and vegetation begins to grow.

A similar islet formed in K. Atoll in the aftermath of a tidal wave which hit Male’ City in 1987. The islet later developed to an island, and is now called Udhafushi.

Addu City, Hithadoo placed in lockdown due to COVID-19