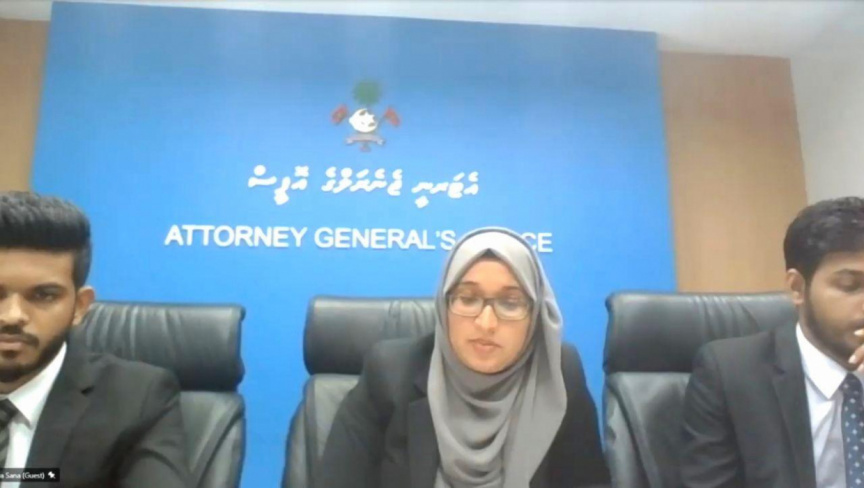 Representatives from the Attorney General's Office during a hearing at the High Court over the quota for women in local councils on October 6, 2020.

Representatives from the Attorney General’s Office argued at High Court on Tuesday that establishing a quota for women in local councils isn’t unconstitutional or constitute gender discrimination.

Moosa Anwar, leader of Juhoory Party (JP)’s Youth Wing, has filed constitutional motion with the High Court, stating that the revision to Decentralization Act to establish a quota for women in local councils is unconstitutional.

The second hearing in the case was held at the High Court on Tuesday.

The state argued that women are disadvantaged in society, and are therefore entitled to special assistance and protection.

The state said that the Constitution therefore envisions affirmative action such as quotas to provide equal opportunities for women.

The state said that developed nations continue to practice quotas for women for electoral positions under substantive equality, a fundamental aspect of human rights law that is concerned with equitable outcomes and equal opportunities for disadvantaged and marginalized people and groups in society.

The state said the practice is also in use in nations such as Kenya, India, and South Africa.

The state said it does not believe establishing a quota for women in local councils violates the fundamental rights and freedoms declared on the Constitution, and asked the court to rule as such.

In response, Moosa Anwar countered that while he believes that special action may be taken to provide equal opportunities to specific groups, he does not believe that special action taken under Article 17 (b) should result in discrimination of another group.

He said that allowing quotas for women opens opportunity for those who win considerably lesser votes to get elected.

Moosa Anwar responded to the state’s argument of quotas for women being practiced in other nations by stating that the nations in question introduced quotas after making necessary amendments to their constitutions.

He maintained that the Maldivian Constitution does not allow for quotas for women, and that quotas can only be introduced after making necessary amendments to the Constitution.

Moosa Anwar responded that quotas’ being an electoral pledge doesn’t excuse violation of the Constitution.

He said that given that Article 18 of Chapter II of the Constitution establishes it as the duty of the state to protect and promote the rights and freedoms declared in the Chapter, the state believing it to be its duty to infringe on and curtail the very same rights and freedoms, is a wrongful interpretation of something the state is obligated to do under Article 18.

Moosa Anwar questioned why similar quotas weren’t set for parliamentary seats, and said that the lack of quotas for women in the parliament proves that the state lacks sincerity.

The High Court will hold one more hearing in the case before issuing its ruling.

The case is overseen by a panel of five judges. The bench is presided over by Judge Mohamed Niyaz, accompanied by Judge Ali Sameer, Judge Abdul Rauf Ibrahim, Judge Hussain Shaheed, and Judge Hathif Hilmy.

Man sentenced to prison for indecent exposure to child