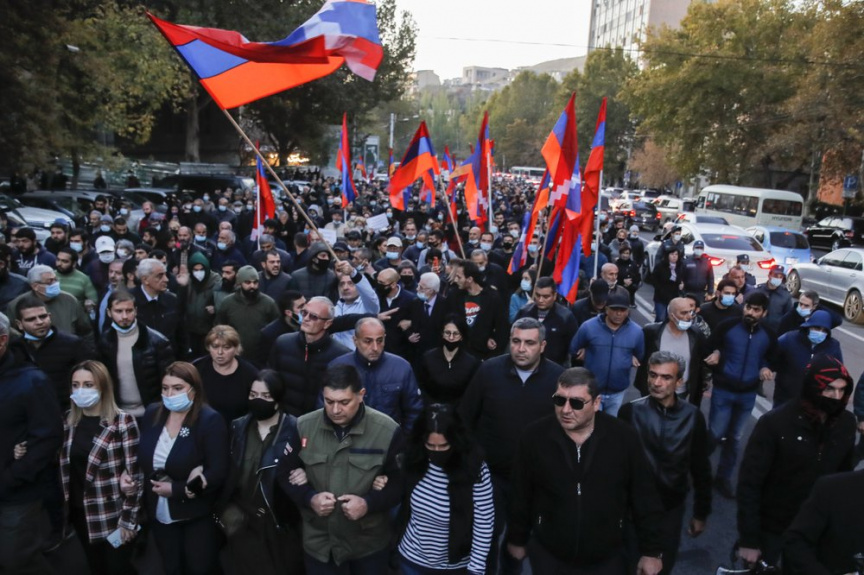 Protesters with Armenian flags walk along a street during a protest against an agreement to halt fighting over the Nagorno-Karabakh region, in Yerevan, Armenia, Thursday, Nov. 12, 2020. Thousands of people flooded the streets of Yerevan once again on Wednesday, protesting an agreement between Armenia and Azerbaijan to halt the fighting over Nagorno-Karabakh, which calls for deployment of nearly 2,000 Russian peacekeepers and territorial concessions. Protesters clashed with police, and scores have been detained. (AP Photo/Dmitri Lovetsky)

YEREVAN, Armenia (AP) — Thousands massed Thursday in Armenia’s capital to protest the terms of a cease-fire agreement that gave territorial concessions to Azerbaijan in the long-running conflict over the separatist territory of Nagorno-Karabakh.

The rally marked the third straight day of demonstrations triggered by the truce to halt more than six weeks of deadly fighting between the two ex-Soviet nations. Nagorno-Karabakh lies within Azerbaijan but has been under control of ethnic Armenian forces backed by Armenia since a separatist war there ended in 1994.

The Moscow-brokered agreement calls for Armenia to turn over control of some areas its holds outside Nagorno-Karabakh’s borders to Azerbaijan.

It prompted celebrations in Baku, but angered Armenians, and many took to the streets soon after it was announced early Tuesday. Protesters stormed government buildings and demanded that the pact be invalidated.

At a large rally Wednesday, Armenian opposition parties and their supporters demanded that Prime Minister Nikol Pashinian resign, calling the agreement he signed “treacherous” and “humiliating.”

Late in the evening, lawmakers called an emergency session of parliament to consider Pashinian’s dismissal but didn’t have a quorum to follow through with it. Pashinian’s faction holds 88 of 132 seats in parliament, and its members didn’t show up.

Armenian authorities said Thursday they detained 10 opposition politicians on charges of fomenting mass unrest. Naira Zograbyan, a member of the Prosperous Armenia opposition party, said at Thursday’s rally that those detained were political prisoners and expressed concern about further crackdowns on the opposition.

Crowds of people marched through the center of Yerevan and denounced Pashinian, chanting “Nikol, go away!” and “Nikol the traitor!” Over 60 people were detained, Russia’s state news agency RIA Novosti reported.

Armenia and Azerbaijan have been locked in a conflict over Nagorno-Karabakh for decades. Heavy fighting that flared up on Sept. 27 marked the biggest escalation in over a quarter-century, killing hundreds and possibly thousands of people.

Several cease-fires in the past six weeks failed to halt the violence, but the current agreement appeared to be holding, with neither side reporting any more fighting since it came into force.

The truce came days after Azerbaijan pushed deeper into Nagorno-Karabakh and took control of the city of Shushi, strategically positioned on heights overlooking the regional capital of Stepanakert.

While Azerbaijan President Ilham Aliyev called the agreement a “glorious victory,” Pashinian insisted in a series of video statements that he had no other choice. On Thursday, he said he signed the pact after the military reported that “the war urgently needs to be stopped,” and the separatist leader of Nagorno-Karabakh told him that “we could lose Stepanakert in a matter of hours.”

Under the agreement, Russia began to deploy peacekeepers to the region — a total of 1,960 of them are to move in under a five-year mandate.

Turkey, which threw its weight behind Azerbaijan in the conflict and sought to play a more prominent role in the peace process, will be involved in monitoring the cease-fire.

Russian and Turkish defense ministers signed a memorandum Wednesday to create a joint monitoring center in Azerbaijan — a move announced earlier this week by Aliyev.

At the same time Russian officials underscored that Ankara’s involvement will be limited to the work of the center on Azerbaijani soil, and Turkish peacekeepers will not go to Nagorno-Karabakh.

“The center will operate remotely, using technical means of control, including drones, to determine the situation on the ground in Karabakh and determine which side is observing and which is violating the cease-fire,” Russian Foreign Minister Sergey Lavrov said.

Armenians torch their homes on land ceded to Azerbaijan