''UTF agreement can be terminated by Maldives at any time'' 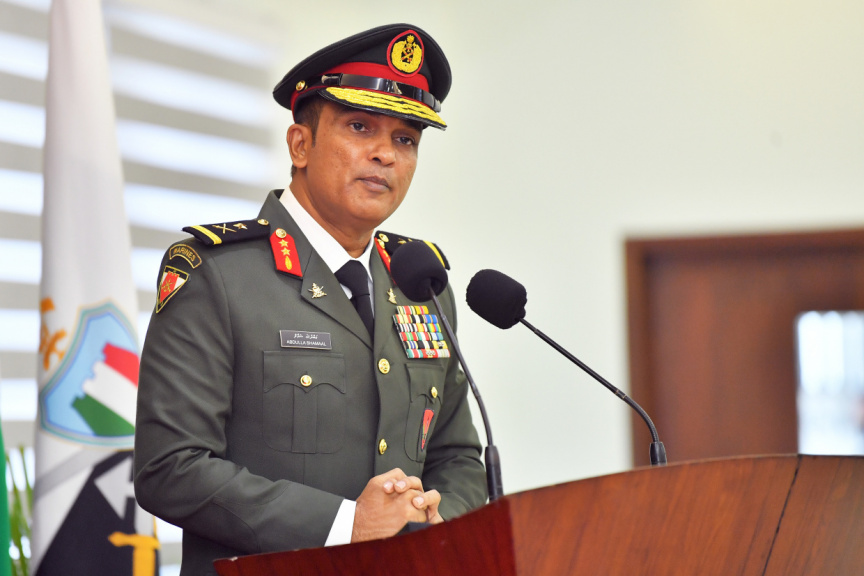 Maldives National Defense Force (MNDF) has stated that the nation has the full authority to terminate the agreement with neighboring India to develop the naval dockyard of Uthuru Thila Falhu (UTF).

MNDF senior officials held a press conference regarding rumors and allegations as well as public concern on social media by those critical of the government and the agreement with India.

The Chief also stressed that the agreement did not include any articles that could cause concern for the public.

"I still have a message I wish to convey. This is something that the national defense force wishes, we are pushing this with the government to do this," said General Shamaal who added that it was a necessary resource to perform the duties of the defense force.

Chief Shamaal also said that the dockyard will be fully operated by the Maldivian military.

"The signed agreement does not state that any military personnel is to be staged. That armed personnel will be operating the dockyard, is also untrue," said Chief Shamaal.

The benefits of the developed dockyard would be extended to the coastguard and MNDF, said Chief Shamaal who noted that the idea had been in existence since 2013.

Chief Shamaal further criticized those who were circulating the fake documents by saying that, "There is no truth to this, Baseless allegations by some are circulated on social media to sensationalize."

He then repeatedly advised not to spread untrue information about the army before warning that all options would be explored to stop such activity.

Chief Shamaal also expressed sorrow that the decorated army officers who had been in service for years, was being used for personal gain, through baseless allegations.

Scenes of heartbreak as young soldier is laid to rest

Autopsy to be performed on deceased MNDF officer