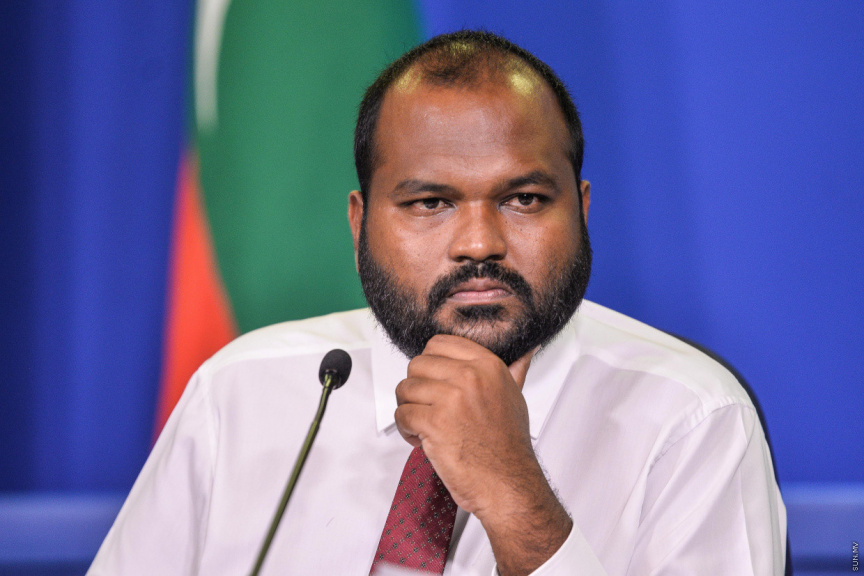 Former Tourism Minister Ali Waheed has been sentenced to two months in prison for contempt of court, after failing to appear before the Supreme Court for his appeal hearing.

The first hearing in the appeal lodged by the Prosecutor General’s Office over the decision to allow online hearings in the criminal case against Ali Waheed was originally scheduled for August 2, but was later rescheduled to 01:00 pm this Wednesday. However, Ali Waheed, who left for UK after the Criminal Court allowed a temporary ease in the travel ban order against him in February, was a no-show at the hearing.

The Supreme Court treated his failure to appear in court as contempt of court, and sentenced him to two months and 12 days in prison for the offense.

The sentence was issued by Justice Husnu Al-Suood, who presides over the bench looking into the case, citing failure to appear before the court two times despite receiving the court summons.

Suood said that no one has the right to disrespect Maldivian courts in that manner, and that Ali Waheed therefore should be punished in accordance with the law.

His ruling was supported by others on the bench – Justice Ali Rasheed Hussain and Justice Dr. Mohamed Ibrahim.

Ali Waheed was held in contempt of court under Section 541 of the Penal Code.

Maldives Correctional Service has been ordered to enforce the sentence.

He initially had a travel ban order against him, but the Criminal Court temporarily released his passport and allowed him to travel overseas for medical treatment on February 9. He promptly left for the UK.

Ali Waheed failed to return to Maldives despite the fact that the four-month period granted by the court for his travel overseas expired last June.

Once in the UK, Ali Waheed filed a motion asking the Criminal Court to allow him to attend his hearings remotely. The motion was allowed by the court despite the objections of the Prosecutor General’s Office.

The Prosecutor General’s Office appealed the decision citing that holding a hearing via video conferencing in a criminal trial with the defendant in a location outside of Maldives’ jurisdiction is in violation of Criminal Procedure Code, and that the court will not have the jurisdiction to penalize the defendant, even if he acts in contempt of the court.

The Prosecutor General’s Office appealed the decision unsuccessfully with the High Court before heading to the Supreme Court.