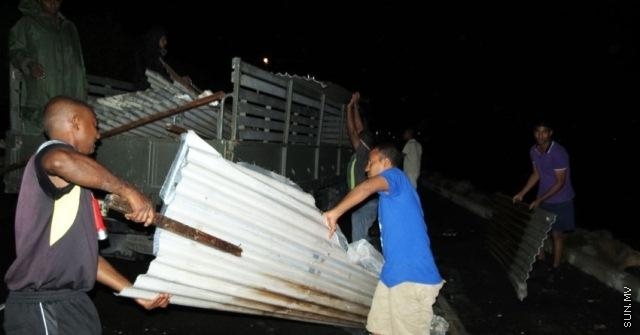 He said that efforts are underway by MNDF to repair the roofs.

No person was injured in the incidents.

The people have been provided temporary shelter by the government.

A citizen of Feydhoo said today that a tornado caused damage to five houses in the island yesterday.

The roof of a house located by the sea on Feydhoo Link Road was thrown off into the sea, while the roof of house behind it was blown off as well. A water apple tree in the garden of the second house also fell.

Three more houses in the island had their roofs blown off, while another house had a mango tree in its garden uprooted.

He said that electric and household items in the houses were damaged due to the rain.

A house in Hulhudhoo, Addu City, also had its roof blown off yesterday by the cyclone winds. The residents of this house have been provided temporary shelter by the City Council.