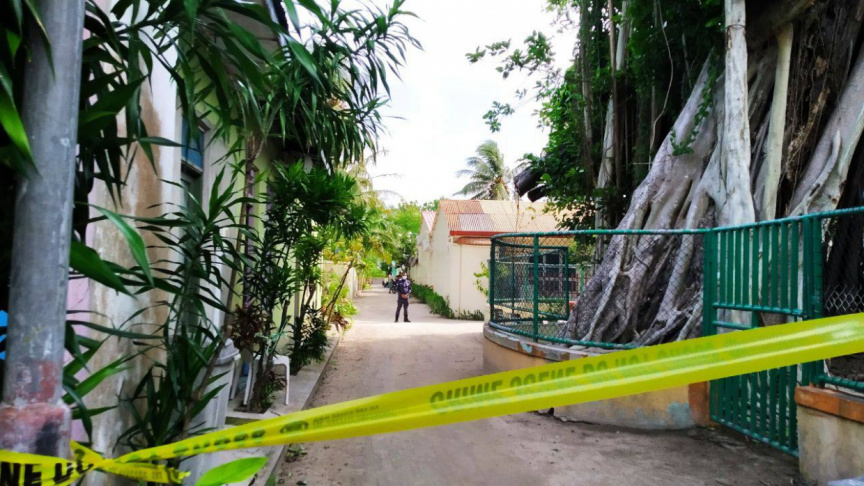 The Police have begun searching additional locations at ADh. Dhangethi in connection to the brutal murder of a businessman on the island.

Mahmood Aboobakuru, 57, was found murdered and thrown into a water well in an abandoned house in Dhangethi on Thursday afternoon, hours after he was reported missing.

A resident from Dhangethi who had witnessed the police search had told Sun that the Police were currently searching the area inside Dhangethi Pre-School where two banyan trees are situated.

The school is located behind the house in which the migrant worker who was arrested in connection to Mahmood’s murder yesterday – was living.

Dhangethi residents who spoke to Sun regarding the search speculate that the area was being search was prompted due to suspicion that the unrecovered items Mahmood was in possession of at the time of his death – may be hidden there.

Mahmood’s family members said that the items he was carrying at the time he went missing – have still not been recovered. The items include his phone, wallet, gold-plated watch, slippers as well as the keys to the godown he owns.

Mahmood was found murdered during a search for him – after having been declared missing. He was last seen alive on Wednesday night. Dhangethi residents commenced an island-wide search at 10:00 am on Thursday morning. His body was discovered during the search at around 15:15 in the afternoon – inside a water well at an abandoned house; bound and stuffed inside a sack.

The Police have yet to confirm the exact cause of death. However, some individuals who saw his body reports seeing repeated blows to his head and neck with a sharp object.

Mahmood is an entrepreneur involved in the business of staple foods and gas, in addition to being an owner of a café and a boat.

Dhangethi residents claim he carried around large amounts of cash always due to his businesses – alleging him to have been murdered in a robbery gone wrong.

Shortly after he was found murdered, residents took the law into their own hands to hand over two men who they believed to the murderers to the police. Subsequently, the two men were granted police protection.

Later, a woman who is related to the two individuals was also granted police protection.

Although they were not under arrest initially – the Police later on confirmed that they were arrested in connection to a separate case.

Following this, the three were escorted out of Dhangethi on Friday – under protective custody of the Police.

In a surprising turn of events, the Police announced the arrest of a male migrant worker from Dhangethi in connection to Mahmood’s murder on Saturday.  The migrant in question works as a live-in caregiver for an elderly man in a house close to where Mahmood’s body was found.

The house was searched by the Police on Saturday morning – prior to his arrest. It is located approximately 100 meters from where Mahmood’s body was found.

A Dhangethi resident who spoke to Sun said the Police searched the house in response to multiple reports of a suspicious noise being heard from the house on the night Mahmood disappeared.

When presented before the court for his remand hearing – the migrant worker was remanded in police custody for 15 days.