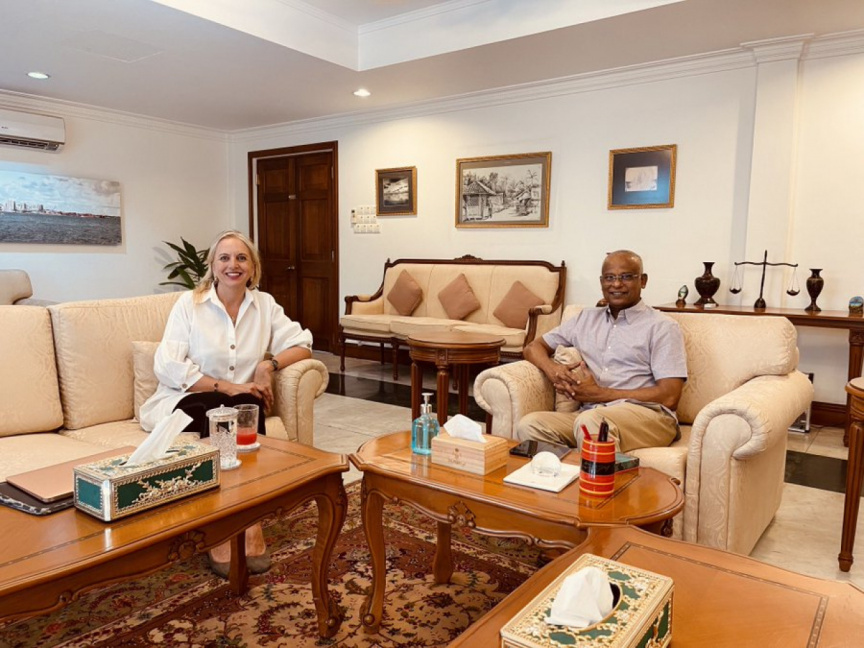 Parliament Speaker Mohamed Nasheed’s lawyer, Janine Kirsty Brimelow, who is representing him regarding the IED attack targeting him on May 6, has met with President Ibrahim Mohamed Solih.

The meeting between the two was held at Mulee’aage on Thursday. Following the meeting, Brimelow said in a tweet that discussions were held regarding the “act of terrorism against the people of the Maldives” and Nasheed, as well as his attempted assassination, on May 6, 2021.

No further details regarding the meeting have been disclosed.

Prior to this, Brimelow has also met Deputy Speaker Eva Abdulla, MDP’s Chairperson Hassan Latheef and members of the May 6 Committee.

Brimelow was appointed by Nasheed to represent him and monitor and work on the criminal investigation into the IED attack targeting him on May 6, back in August.

Brimelow is a highly experienced criminal lawyer from the UK – who is also a member of the British Queen's Counsel (QC).

The British QC is an independent panel that consists of a set of barristers and solicitors who the monarch appoints to be a part of Her Majesty’s Counsel learned in the law. To achieve this status, the barrister or solicitor must have practiced law for ten years. Queen Counsel members are recognized as experts and leaders in their field – taking lead on particularly complex cases.

Following the appointment of Brimelow – People’s Majilis said that she was appointed to exercise her expertise in evidence gathering and application of national and international law side by side with local and foreign law enforcement and lawyers – with the common goal of bringing the perpetrators to justice.

A homemade remote-controlled IED was strapped to a motorcycle parked nearby Nasheed’s residence, and was detonated at 08:27 pm on May 6, just as Nasheed, 54, exited his residence and went to get in his car. Nasheed was thrown to the ground and sustained multiple shrapnel wounds, while three members of his security detail and two bystanders sustained minor wounds.

He was rushed to ADK Hospital, where he underwent multiple lifesaving surgeries to remove ball bearings and other shrapnel, some of which perforated his internal organs.

He was airlifted to a military hospital in Germany on May 13, and traveled to the UK in July for further treatment.

He returned to Maldives after spending four months abroad on October 11.

Adhuham, whom the police suspects to have detonated the IED, signed a plea deal with the State and pled guilty to all charges at court.

Court has granted the lawyers of Mujaz, Thahmeen and Is’haq additional time to review the documents and videos submitted as evidence by the State – before responding to the charges.

Envoy: No breakthrough in probe into wider links

Parliament expresses concern over delay in May 6 trials

Abbas Faiz concerned over delays in May 6 attack trials

May 6 blast: Adhuham sentenced to 23 years in prison

May 6 blast: Adhuham to be sentenced on Tuesday