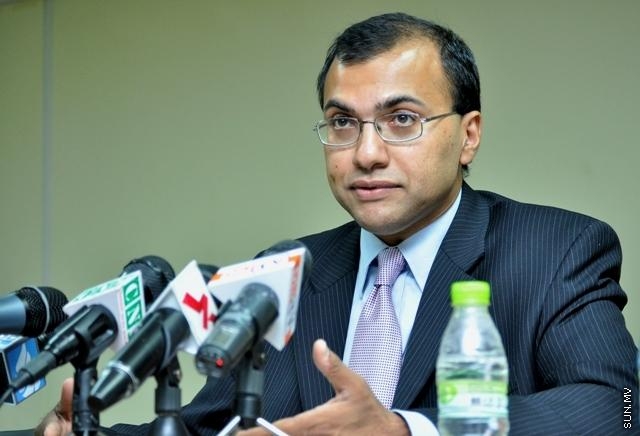 The International Monetary Fund (IMF) has said that the Foreign-exchange reserves of the Maldives Monetary Authority (MMA) is under pressure due to increasing imports and estimated increase in the Balance of Payments deficit.

Chief of IMF Mission currently visiting Maldives, Koshy Mathai, while speaking at a press conference held at MMA Auditorium today, highlighted the deteriorating Balance of Payments position of the Maldives, and said that this would result in an estimated Current Account deficit of 30 percent of GDP.

Mathai said that unless the money loaned by the country is rolled over within the upcoming months, serious pressure will be imposed on MMA's reserves.

He stressed the importance of cutting down state expenditure, and said that Fiscal deficit is estimated to increase to 16 percent of GDP.

He informed that the economic growth will go down by three percent due to difficulties faced by the tourism industry.

The review conducted by IMF states that the economy of the Maldives will achieve some growth next year. Mathai said that despite the spike in inflation due to imposition of GST and changes in commodity prices in the world market, inflation is likely to go down to 6 percent next year.

He recommended the government to cut down costs, to establish a Pay Commission to reduce civil servant salaries, and to reduce the size of the civil service in order to improve the Fiscal deficit and the Balance of Payments. Mathai also said that more jobs need to be created in the private sector.

The IMF Mission will compile its report and present it at the Fund's Board meeting in January.

Protest against GMR held at sea