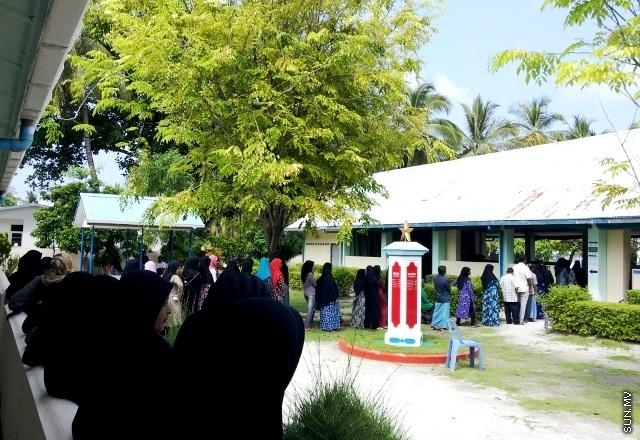 Voting in the by-election to elect an MP for the vacant seat of Ungoofaaru Constituency is going on since this morning.

Voting began this morning at 8 o’clock, in the three islands which belong to Ungoofaaru Constituency, namely Ungoofaaru, Hulhuduffaaru, and Maakurathu, all in Raa Atoll. In addition, ballot boxes have been placed in Malé, the capital, as well, for those from these islands who are residing in Malé. Ballot boxes in Malé are placed at Taajuddin School.

Ballot boxes would be closed this evening at 4 o’clock.

Two candidates are contesting for the vacant seat. They are Ibrahim Ameen from the Progressive Party of the Maldives (PPM) and Dr. Ahmed Ashraf from the Maldivian Democratic Party (MDP). Both of these hail from Ungoofaaru in the constituency. Although an independent candidate registered his name for the contest, he withdrew his name at the last minute and sided with Ameen.

The Elections Commission also says that voting process has been going on smoothly, and that there have been no issues or problems. Officials are on standby to deal with any.

By afternoon, some 1735 people had attended the ballot boxes, constituting 53.77 per cent of the total of eligible voters.

Ungoofaaru Constituency’s seat at the People’s Majlis became vacant when Dr. Afrasheem Ali, who represented the Constituency, was brutally murdered on the night of 1st October this year. He was one of the most prominent Islamic scholars in the country as well, and belonged to the PPM. Ibrahim Ameen who is now contesting for the seat on behalf of PPM is the deceased’s brother.