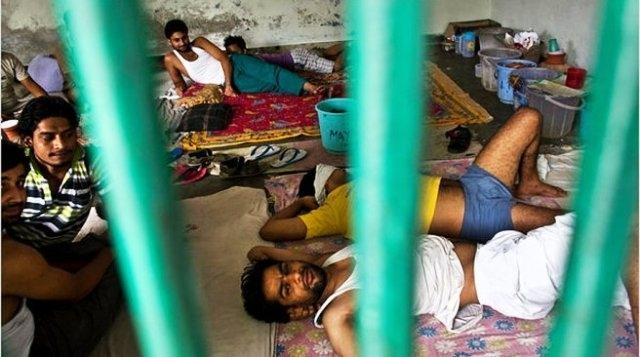 Foreign Ministry has said that there are 11 Maldivians currently carrying out jail sentences in foreign countries because Maldives lacks the proper laws to transfer them back home to carry out the remaining time of their sentences.

Four people have also been arrested in Malaysia recently. Their charges are yet unclear.

A Maldivian student was recently arrested in Malaysia for the lack of a passport, and was detained for several days before being released.

Speaking to Sun, an official from the Foreign Ministry said that the Ministry is gravely concerned about the number of people being detained in foreign jails and that the Ministry has been working on transfering them to jails in Maldives. A prisoner transfer agreement has been signed with Sri Lanka and India, and prisoners may be handed over to the Maldivian government under those agreements but, the lack of a proper laws in Maldives makes the process difficult, the official said.

“We have worked hard for such a law. It is however, a thing for the Attorney General. We can send away the foreigners in our jails, but to transfer a Maldivian to Maldives, we lack the proper law on how the person may carry out the sentence. There are numerous people who we have not been able to transfer because of the lack of such a law. If not, we can transfer them to Maldives,” said the official.

Under the agreement, the government is currently in the process of transferring sick and unwell Sri Lankan and Indian inmates to their home countries. The Foreign Ministry official said that foreign jails hold ill and unwell Maldivians as well, and that the woman serving a drug sentence in a Sri Lankan jail has severe health issues. The official said that the Ministry wants to transfer the inmate back to Maldives, but that their ability to do so is limited because the Maldives lacks the proper legislation stipulating the conditions for them to serve their sentences back home. The official however did not mention what illness the inmate is suffering from, or her present condition.

“The woman serving a drug sentence in Sri Lanka is also very sick. We are monitoring her case closely. With the support of the High Commission, we visit her jail regularly and are trying to help her,” the official said.

I doubt the efficacy of capital punishment as a means of deterring crime: British High Commissioner