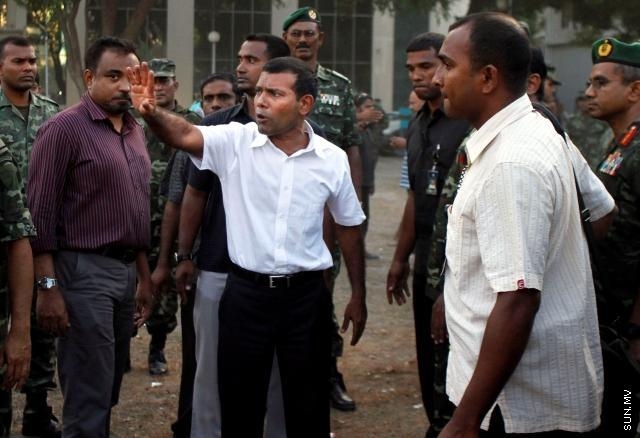 Former President Mahomet Nasheed resigned from office on the 7th of February 2012 not under a threat to life or under duress, said Thal’hath Ibrahim Kaleyfaanu, Nasheed’s Defense Minister who was with him on that day.

Speaking to the Committee on Government Accountability at the People’s Majlis, which has been conducting what it calls a “study of the Report of the Commission of National Inquiry (CoNI)”, Thal’hath said that no one could threaten the life of President Nasheed while he was within the walls of the headquarters of the Maldives National Defense Force (MNDF). Thal’hath also said that the situation did not escalate to a point where Nasheed would be forced to resign.

“I do not believe that anyone can pose a threat to President Nasheed’s life while he was within the MNDF headquarters. From the beginning till the end, Nasheed was under full protection of the security forces. When he walked to the President’s Office, he was given a timeline to announce his resignation, but such a timeline did not mean that he had to, or that he was forced to resign. He did not have to resign. The circumstances did not become so grave that he had no choice but to resign”, said Thal’hath.

Pointing to the fact that Chief of Defense Force Major General (now retired) Moosa Ali Jaleel was not in uniform on the field during the incidents of 7th February, Thal’hath said that he was trying to take no responsibility for the things happening there. Thal’hath said that Jaleel did not attempt to solve the problems.

Usfasgandu ordered to be handed over within seven days