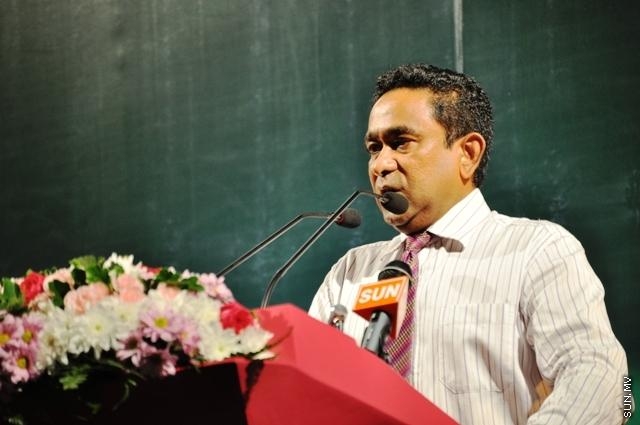 Yameen, while speaking at the rally at carnival area organised by PPM to mark the one year anniversary of the change of former President Mohamed Nasheed’s government, called on President Waheed to correct several issues.

“What we’re seeing today, and it is with sadness I say this, is the current government failing. The institutions are now incapable,” he said.

Yameen said that activities such as crime on the streets and breach of people’s rights are still ongoing.

“Crime on the streets is still ongoing. Other rights of the people are also being violated. We want a pure, courageous, steady government; we want a government that remains as one we support,” he said.

Yameen said that a court warrant must be obtained before a state property is checked, and criticised the police for their attempt to take over Usfasgandu.

“With that, the police have to assure that the people will be protected. They have to ensure that laws are implemented. If we go to court to implement a law we have to wait three years, we won’t wait three years without emptying Usfasgandu,” he said.

He said that foreign countries interfere with internal issues of the Maldives more than they should, and that this was possible because the government gives them this opportunity.

“Foreign countries are interfering with internal issues of the Maldives to a greater extent than we’re comfortable with. The government is giving them that opportunity,” he said.

“I want to say to President Waheed, set things right. Correct issues. He calls for a coalition, but I want to say that we obey and respect the law. The party has to be good, lawful. So when he says that their doors are open, I want to say that PPM’s doors have been open for much longer,” he said.

Yameen said that the government has come to a halt, and that no one can accuse PPM of having destroyed the state budget.

“I want to say that, for various reasons, the government has come to a halt. Don’t let this happen. In order to reach the elections, we have to grant the people’s wishes. Blaming PPM for destroying the budget won’t solve anything. You have to have the courage to do things. Corruption exists now in the current government as well.”