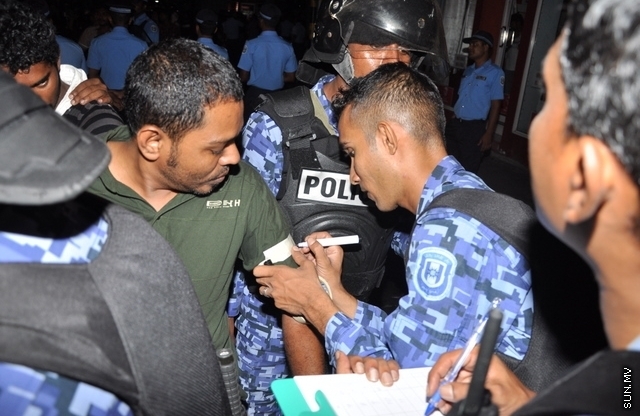 Maldives Development Alliance (MDA) has said that the police and military serve a valuable service to the nation and has called to show them the respect and appreciation they deserve. The statement was made by the party’s Interim Deputy Leader Aishath Rafiyya during a special meeting held by the party in Noonu Kedhikolhudhoo.

In her speech, Rafiyya said that the police and military have gained special training in their respective fields and that they work with honesty and loyalty. She said that they serve a valuable service to the society and called upon the people to appreciate their work.

Speaking at the meeting, MDA Deputy Leader and Kudahuvadhoo MP Ahmed Amir said that some political people try to take credit for the fundamental rights and services guaranteed by the laws and the constitution. He said that some people to try portray the special provisions given to the elderly and single parents as something that was awarded by their own providing, and said that there is no truth to such claims. He said that these provisions are stated in the constitution and that it should be provided regardless who comes to power. He however said that MDA does not believe that the current amount allocated for such provisions is appropriate. Amir said that the party will always work towards revealing the truth and oppose the lies told by people who want to deceive the citizens.

MDA Deputy Leader Ali Mauroof also spoke at the meeting. During his speech, Mauroof said that the condition of the country can only be changed if the people actively take part in politics to change their state. He said that multiparty governance model has been tested around the world and is proven to be successful, and called upon the people who have not yet joined a political party to choose their political ideology. Mauroof called on the people to choose MDA as their ideology.