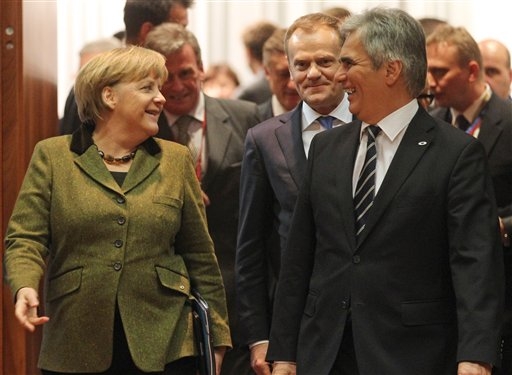 WARSAW, Poland (AP) — The leaders of France, Germany and four Eastern European countries have pledged to strengthen their cooperation in the area of defense.

Prime Minister Donald Tusk of Poland said the nations made significant process in talks on strengthening the defense cooperation and that he expects to see practical results in the coming years.

He spoke Wednesday at a news conference in Warsaw alongside German Chancellor Angela Merkel, French President Francois Hollande and the prime ministers of Hungary, Czech Republic and Slovakia.

Hollande says any deepening of collective defense must be made within a strategic vision adopted at an EU summit later this year.

He says it's important to clarify how military operations, like those in Africa, would be conducted with good coordination and speed. France is currently battling militants in Mali.

Separately, the defense ministers of Poland, Hungary, Czech Republic and Slovakia — known together as the Visegrad group — signed a letter of intent to form a joint fighting unit.

The unit will consist of 3,000 soldiers and have combat readiness by 2016.

US accuses Iran of nuke 'deception and delay'