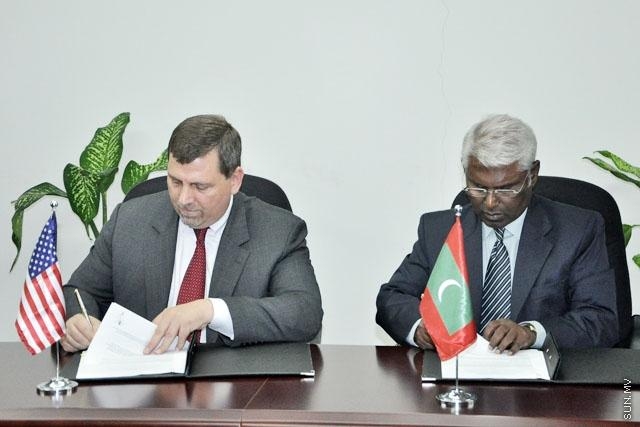 A Memorandum of Understanding (MoU) has been signed between the Maldives and the United States, to conduct two projects worth $9.7 million (MVR 150 million) in the Maldives.

The MoU was signed by Ambassador-at-Large at the Ministry of Foreign Affairs, Abdul Azeez Yoosuf on behalf of the Maldivian government, and Acting Mission Director at the U. S. Agency for International Development (USAID), Todd Sorenson on behalf of the U.S. government.

He said that over the next five years, more projects will be planned and MoUs will be signed to implement those projects in the Maldives.

USAID Acting Mission Director Todd Sorenson said that the relations between the Maldives and the U.S. are strong, and expressed hope that the Maldivian government and people will continue to cooperate with the U.S. in such projects in the future. He said that efforts will be made to provide assistance to the Maldives in various sectors in the future as well.