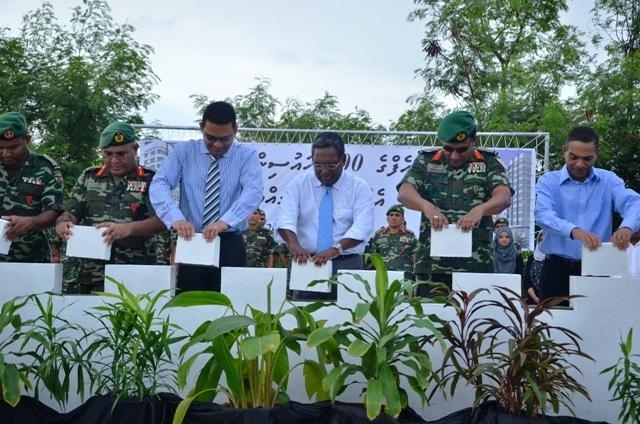 The foundation stone has been laid in Hulhumale’ for 300 housing units to be developed for the Maldives National Defence Force (MNDF).

The foundation stone was laid by President Dr Mohamed Waheed, Minister of Defence Mohamed Nazim and senior officials of MNDF at a ceremony held in Hulhumale’ today.

The project to construct 300 housing units is carried out by Hulhumale’ Development Corporation (HDC), Noomadi Resorts Residence and SIFCO.

MNDF said that flats will be given from the new units to female MNDF officers who did not receive flats earlier, and retired officers who meet the necessary requirements.

Speaking at the ceremony in Hulhumale’, President Waheed highlighted the importance ensuring the provision of the services required by MNDF, and said that similar projects will be implemented in the future as well.

While 300 new housing units are to be constructed for MNDF, 50 flats were handed over to MNDF on 15 August as well.