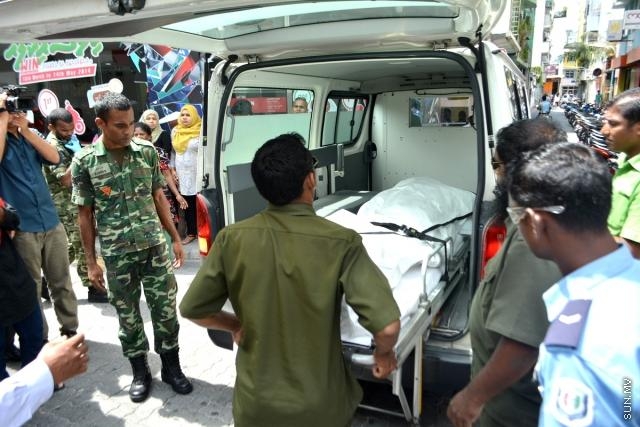 The family of the person who was found dead in Henveyru Annaarumaage this morning has said that he was released from the Drug Rehabilitation Centre in Himmafushi yesterday.

The deceased is Mohamed Rasheed, 24, from Kulhudhuffushi.

Mohamed was convicted for using drugs and sentenced to six years in prison, but transferred to a rehab in December 2013.

Mohamed’s uncle Abubakuru Jauhary told Sun Online that the the cause of death remains unknown, and that the family was only informed of his release by Mohamed himself.

He said that Mohamed has no place to live in Male’, and that the family had decided to visit the community centre today to figure out how to proceed.

Jauhary said that he learned of Mohamed’s death when he visited the house, when Mohamed’s father asked him to check on Mohamed after he failed to answer his phone.

“Mohamed was released yesterday, and he was staying with a friend at Annaarumaage until the community centre could make arrangements. His friend was there when I went to the house, who told me that Mohamed was still sleeping when he woke up. When we went and checked, he was dead,” he said.

Jauhary expressed sadness over the family not being informed of Mohamed’s release, especially when he had nowhere to stay in Male’.

CEO of National Drug Agency (NDA) Ahmed Muneer said that Mohamed was released after he completed treatment at the rehab, to be transferred to the community centre.

He said that the family had been informed of his release one day before he was taken to Male’.

He explained that community treatment requires patients to take several classes, and they are required to stay in Male’ until this process is completed. He said that it is not an acceptable excuse to claim that the patient had nowhere to stay in Male’.

Muneer said that the family must take responsibility for such accidents instead of trying to blame NDA.