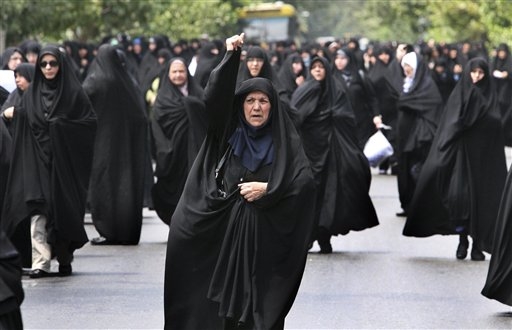 CANBERRA, Australia (AP) — Muslim women would have to remove veils and show their faces to police on request or risk a prison sentence under proposed new laws in Australia's most populous state that have drawn criticism as culturally insensitive.

A vigorous debate that the proposal has triggered reflects the cultural clashes being ignited by the growing influx of Muslim immigrants and the unease that visible symbols of Islam are causing in predominantly white Christian Australia since 1973 when the government relaxed its immigration policy.

Under the law proposed by the government of New South Wales, a woman who defies police by refusing to remove her face veil could be sentenced to a year in prison and fined 5,500 Australian dollars ($5,900).

The bill — to be voted on by state parliament in August — has been condemned by civil libertarians and many Muslims as an overreaction to a traffic offense case involving a Muslim woman driver in a "niqab," or a veil that reveals only the eyes.

The government says the law would require motorists and criminal suspects to remove any head coverings so that police can identify them.

Critics say the bill smacks of anti-Muslim bias given how few women in Australia wear burqas. In a population of 23 million, only about 400,000 Australians are Muslim. Community advocates estimate that fewer than 2,000 women where face veils, and it is likely that even a smaller percentage drives.

"It does seem to be very heavy handed, and there doesn't seem to be a need," said Australian Council for Civil Liberties spokesman David Bernie said. "It shows some cultural insensitivity."

The controversy over the veils is similar to the debate in other Western countries over whether Muslim women should be allowed to wear garments that hide their face in public. France and Belgium have outright banned face covering veils in public. Typical arguments are that there is a need to prevent women from being forced into wearing veils by their families or that public security requires people to be identifiable.

Bernie points out that while a bandit disguised by a veil and sunglasses had robbed a Sydney convenience store last year, there were no Australian crime trends involving Muslim women's clothing.

"It is a religious issue here," said Mouna Unnjinal, a mother of five who has been driving in Sydney in a niqab for 18 years and never been booked for a traffic offense.

"We're going to feel very intimidated and our privacy is being invaded," she added.

Unnjinal said she would not hesitate to show her face to a policewoman. But she fears racist male police officers might misuse the law to deliberately intimidate Muslim women.

"If I'm pulled over by a policeman, I might say I want to see a female police lady and he says, 'No, I want to see your face,'" Unnjinal said. "Where does that leave me? Do I get penalized 5,000 dollars and sent to jail for 12 months because I wouldn't?"

Sydney's best-selling The Daily Telegraph newspaper declared the proposal "the world's toughest burqa laws." In France, wearing a burqa — the all-covering garment that hides the entire body except eyes and hands — in public is punishable by a euro150 ($217) fine only.

"I don't care whether a person is wearing a motorcycle helmet, a burqa, niqab, face veil or anything else — the police should be allowed to require those people to make their identification clear," State Premier Barry O'Farrell said in a statement.

The laws were motivated by the bungled prosecution of Carnita Matthews, a 47-year-old Muslim mother of seven who was booked by a highway patrolman for a minor traffic infringement in Sydney in June last year.

An official complaint was made in Matthews' name against Senior Constable Paul Fogarty, the policeman who gave her the ticket. The complaint accused Fogarty of racism and of attempting to tear off her veil during their roadside encounter.

Unbeknown to Matthews, the encounter was recorded by a camera inside Fogarty's squad car. The video footage showed her aggressively berating a restrained Fogarty and did not support her claim that he tried to grab her veil before she reluctantly and angrily lifted it to show her face.

Matthews was sentenced in November to six months in jail for making a deliberately false statement to police.

But that conviction and sentence were quashed on appeal last month without her serving any time in jail because a judge was not convinced that it was Matthews who signed the false statutory declaration. The woman who signed the document had worn a burqa and a justice of the peace who witnessed the signing had not looked beneath the veil to confirm her identity.

Bernie, the civil libertarian, said the proposed law panders to public anger against Muslims that the case generated in talk radio and tabloid newspapers, which itself is a symptom of the suspicion with which immigrants are viewed.

Muslims are among the fastest growing minorities in Australia and mostly live in the two largest cities, Sydney and Melbourne. There are many examples to suggest they are not entirely welcome.

Muslim and non-Muslim youths rioted for days at Sydney's Cronulla beach in 2005, drawing international attention to surging ethnic tensions. Proposals to build Islamic schools are resisted by local protest groups. The convictions of a Sydney gang of Lebanese Muslims who raped several non-Muslim women were likened by a judge to war atrocities and condemned in the media.

In 2006, then-Prime Minister John Howard published a book in which he said Muslims were Australia's first wave of immigrants to fail to assimilate with the mainstream.

Government leaders have also condemned some Muslim clerics who said husbands are entitled to smack disobedient wives, force them to have sex and for suggesting that women who don't hide their faces behind veils invite rape.

"I wouldn't like to go and say this is Muslim bashing," said Ikebal Patel, president of the Australian Federation of Islamic Councils, of the proposed New South Wales laws.

"But I think that the timing of this was really bad for Muslims," he said.