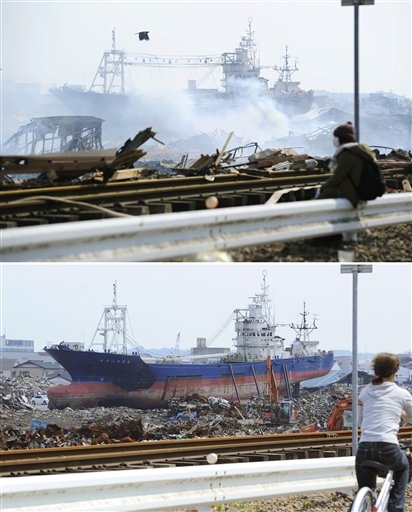 TOKYO (AP) — A strong earthquake with a magnitude of 7.3 hit Japan's northeastern coast on Sunday, prompting a brief tsunami warning for the area still recovering from a devastating quake and killer wave four months ago.

Residents in coastal areas were warned to evacuate for about two hours after the quake, but there were no immediate reports of damage.

The quake hit at 9:57 local time (0057 GMT), and a warning of a tsunami was issued for most of the northeastern coastline. The epicenter of the quake was in the Pacific Ocean off the coast of Japan's main island, Honshu, at a depth of about 20 miles (30 kilometers).

Japanese officials predicted the quake could generate tsunami of up to 20 inches (50 centimeters), but the initial waves were only about 4 inches (10 centimeters). The tsunami warning was lifted after the forecast arrival time of the waves passed in most areas without any tsunami being recorded.

Japan's Meteorological agency at first estimated the strength of the quake at 7.1, but later revised that to 7.3. It also revised the depth estimate from 10 to 30 kilometers.

Japan's northeastern coastline was devastated by an earthquake and tsunami on March 11 that left nearly 23,000 dead or missing and touched off a nuclear crisis at a badly damaged facility in Fukushima.

Officials said there were no reports of abnormalities at the Fukushima plant caused by Sunday's quake, though workers were instructed to move to high ground. Airports in the area were also functioning normally.

Japan is one of the world's most earthquake-prone countries. Dozens of strong aftershocks have been felt since the March 11 disaster, which measured a 9.0 magnitude and was the strongest in Japanese history.

Sunday's quake registered 4 on the Japanese scale of 7, meaning it was felt as moderately strong. Because of the damage from the March quake and tsunami, however, many buildings in the area are structurally weak and seawalls have been destroyed, making the region more vulnerable to relatively weaker quakes.